My absolute favorite romances revolve around the fake dating trope. Less a romance, more a fauxmance. They all start mostly the same – with a few important variables. Are our protagonists’ strangers? Are they enemies? Just acquaintances? What do they stand to gain from this fake relationship? Some aim to raise their social standing, others to get their parents or friends off their back, and some just want to get their ex’s attention.

However they set the scene, these fake dating stories are swoon-worthy, awkward, hilarious and heartwarming. They make us fall in love alongside them. Then they break our hearts before piecing them back together. When a fauxmance is done right it is immersive and engaging. Here are some of my favorite.

Fake it Till You Break It by Jenn P. Nguyen 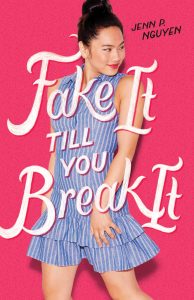 Have you ever known two people who you just knew would be perfect together? Like, soulmate level of perfect? Well, Jake and Mia’s mothers are BFFs who know their kids would be amazing together. Jake and Mia don’t  agree or even get along. However, they decide to strike a deal to pretend to date to get their mothers off of their respective backs.

You’ve probably already guessed that they wind up catching real feelings for each other. We, the readers, get to experience it with both Jake and Mia as we switch between their perspectives and witness their growing emotions. Their childhood memories are sprinkled throughout and add so much heart to the story.

I loved this story! I once again found myself found myself falling in love alongside the characters, despite their best efforts. Nguyen crafted a wonderfully realistic story. Order up some dim sum and curl up with this one.

To All the Boys I’ve Loved Before by Jenny Han 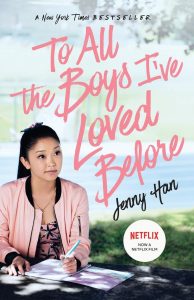 Lara Jean is one of the most identifiable protagonists I’ve ever read. She writes letters to all of the big crushes of her life and never sends them, saving them in her room. This naturally sets her up for a disaster of epic proportions when they are somehow sent to their intended – or rather unintended – recipients.

The letter recipients include her first kiss, the cute boy from summer camp and her older sister’s ex-boyfriend. Surrounded with bad choices, awkward choices and devastation, Lara Jean agrees to fake date Peter, a classmate she barely knows. *swoon*

Jenny Han spins a tale of family, of romance, of being a teenager and makes it feel genuine. Her characters are well fleshed out and relatable. This is also one of the few books where I think the movie does a good job of representing the book. Pop some popcorn, invite over some friends and watch this one- after you read it! 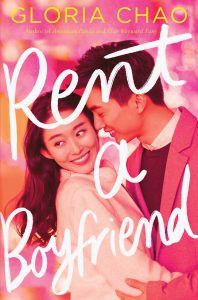 Chloe’s parents selected their ideal son-in-law and are pressuring Chloe to accept his proposal. Having a tight-knit Asian-American community has meant limited dating options for Chloe. Hongbo checks all of her parents’ boxes (and none of Chloe’s). Hongbo is slimy. He’s repulsive. He’s an absolute no.

Enter “Rent for your ‘Rents” – a company that specializes in providing fake boyfriends who can pass even the strictest parents scrutiny. Drew is an art student working for “Rent for your ‘Rents” to pay his bills after being cut off by his parents who do not approve of his choice of studies. When he’s hired by Chloe it seems like a simple enough job. The mission is to act as her kind, smart, non-handsy boyfriend and help her convince her parents to stop pushing her toward Hongbo.

The book alternates between Drew and Chloe’s perspectives. This allows us to experience the whole shebang as they inevitably begin to catch genuine feelings for each other.

Unlike the rest of the reads spotlighted in this blog, Chloe hires her fake boyfriend. This gives the book an added twist, spice if you will, that makes it a fun read. Gloria Chao, who also wrote American Panda, tells this laugh-out-loud funny story that will warm your heart. She expertly weaves culture into the pages and carves full lives for her characters. Read this one ready to laugh and add it to your favorites list.