I am craving cardigans, pumpkin spice lattes and evenings that get dark early. Fall puts me in the mood for a good, spooky book to give me that edge of a chill. Here are three of my recent favorite YA reads, plus a bonus recommendation, that satisfied my fall cravings. 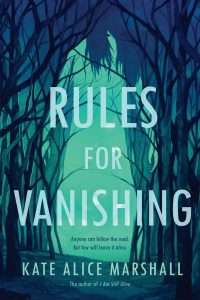 Rules for Vanishing gives me everything I want in a spooky fall read. Sara lives in the kind of small town where everyone knows everything about everyone. Which means everyone knows her sister, Becca, disappeared. With no evidence, many, including their parents, believe Becca ran away. Others, however, remember the urban legend of Lucy Gallows and the mysterious road in the woods that only appears when it wants to. As the one-year anniversary of Becca’s disappearance approaches, Sara’s entire class receives an anonymous text inviting them to the woods to “play the game”– the game to summon the road and follow Lucy Gallows. Everyone thinks it’s a prank or that it’s from Sara, but her estranged friends show up in the woods anyway. Meanwhile Sara finds a notebook in Becca’s room detailing cryptic and confusing rules for traveling the road.

This book is about a diverse group of friends, who haven’t really been friends for a while, traversing a dangerous road, following rules they don’t understand and facing unimaginable horrors. Where is Becca? Who was Lucy Gallows? Can they trust each other? And where is this road leading?

Kate Alice Marshall serves up scares and chills in Rules for Vanishing. This unique tale echoes the faux-documentary style of The Blair Witch Project by giving us a story that unfolds in transcripts of interviews, witness statements, group chats and videos. It makes everything feel more real. Here’s a final warning that this brilliant book is, in fact, actually scary. If you loved Paranormal Activity or The Blair Witch Project, you will love this. If those movies terrified you, maybe think twice about this one. As a side note, those movies terrified me and I adored this book. 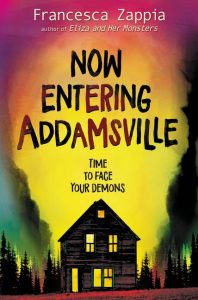 Zora Novak’s family is notorious in Addamsville. Her father is about to be released from prison after conning several people in town, leaving them broke and angry. Her mother has always been strange, but now she’s missing and rumors swirl around her disappearance. The town believes Zora is an arsonist after she was found at the scene of a large fire. People think Zora is as strange as her mother and as untrustworthy as her father.

Zora has more than her share of secrets. She can see ghosts and she hunts the fire starting demons (AKA firestarters). She believes a longtime resident of Addamsville just might be a firestarter. When a popular ghost hunting TV show comes to town trouble is brewing. The kind of trouble that for those in the know points to a firestarter and for others it looks like arsonist Zora is at it again.

This time Zora will need help to track down the firestarter. Along the way she might come closer to solving the mystery surrounding her mother’s disappearance. Betrayals and burnt bridges clutter her past, leaving Zora reluctant to accept the help she needs. Can she figure out who’s trustworthy among those who offer their help?

Zappia’s writing shines in this dark, quirky adventure. She delivers a smart, witty, serious story that left me wanting more. The character of Zora simultaneously feels familiar while also feeling utterly foreign. Coming from a family that’s notorious for all the wrong reasons, Zora has to work hard to keep the town safe while battling naysayers and her own quick temper. I suggest you enjoy Now Entering Addamsville with a blanket, a hot beverage and an overcast day.

The Agony House by Cherie Priest, Illustrated by Tara O’Connor 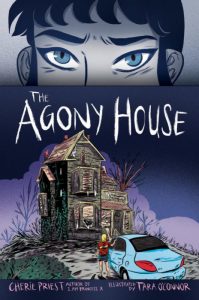 Denise Farber just moved to New Orleans with her mother and stepfather. Well, they just moved back. After her father and grandmother died during Hurricane Katrina Denise’s mother packed her up and they moved to Houston, Texas. Now, years later they return to fulfill her grandmother’s dream to restore one of the old beautiful houses and convert it into a bed and breakfast.

There are just a couple of problems with their plan. First, the house on Argonne Street is, in Denise’s words, a “craphole.” The work that needs to be done to bring the house up to code is daunting. The second problem, arguably the larger problem, is that the house is haunted. Like really haunted.

Terry from down the street, who is obsessed with ghost hunting, becomes one of Denise’s first friends. They explore the creepy attic and discover a hidden comic book manuscript. Surprisingly it is still in pretty good condition so they decide to read it. This is when the real haunting begins. Denise quickly determines there are two ghosts – one with dark intentions and one who is trying to help the family.

With this book Cherie Priest managed to tick all my boxes. This story is spooky while also managing to feel cozy. She also, with the help of illustrator Tara O’Connor, delivered a story told in mixed format, which is something I love in a book. Interspersed throughout the story are pages of the comic book that Denise and Terry found. We get to read it with the characters. This book is a perfect fall read with an enjoyable prose, excellent illustrations and a riveting story. 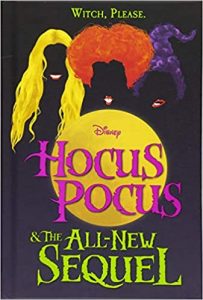 Sneaking in a bonus recommendation for you! While I wouldn’t call this duo spooky, Hocus Pocus gives me all of those cozy, nostalgic feels. Watching this movie is a fall ritual for me – okay, fine, I watch it all year long. If you’re a little older like me, you’ll love revisiting the world of the Sanderson Sisters. If you haven’t experienced the movie yet, you have got a treat ahead of you.

The book begins in the past with the Sanderson Sisters, three witches with ill intentions, casting a dark spell. The residents of their village converge on them to put a stop to their evil, but the Sisters manage to cast one last spell that gives them a way to return. In the present time of the story, which is set in the 1990s, we meet Max and Dani who just moved to Salem from New York. Max is saddled with the chore of taking Dani trick-or-treating and they run into Max’s crush from school: Allison. In an attempt to impress her, Max accidentally fulfills the requirements of the Sanderson Sisters’ last spell, returning them from the dead. The book, like the movie, is a humorous romp that reminds me of everything I love about Halloween.

The long awaited sequel takes place 25 years after the events of the first book and catches up with our favorite characters. The main character is Poppy. Like our first trio in Hocus Pocus, she unites with friends to make some bad choices on Halloween and once again winds up raising the Sanderson Sisters. Poppy and her friends need the guidance of those who defeated the Sandersons’ previously as this time, they’ve set their sites bigger than just Salem. I don’t want to give too much away, but let’s just say Poppy comes by her trouble-making ways naturally. The best thing about the sequel is the opportunity for old fans, like myself, and newer fans to linger in the world of Hocus Pocus a little bit longer.

Check out this list of some of my other favorite spooky books:

What are your favorite spooky reads?