Happy Pride, y’all! June is the month we remember and honor the Stonewall riots of 1969. As the LGBTQ+ community continues to strive for equal rights, we also celebrate how far we’ve come. One example of the strides the community has made is in the availability of books and literature celebrating the stories of our community. I have assembled some of my favorite YA fiction that delivers great stories, powerful writing and diverse perspectives. 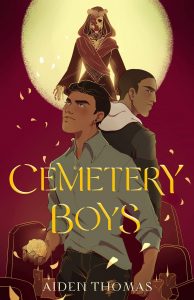 In Cemetery Boys we meet Yadriel on an auspicious day. In his community Brujo’s and Bruja’s have a magical rite of passage with their patron goddess, the Lady Death. As a transgender Brujo, Yadriel has had his rite put off indefinitely. The story begins with Yadriel and his best friend Maritza completing his rite on their own. There is just one final test for Yadriel to pass – he must summon a ghost and release it from this world.

Yadriel accidentally summons the wrong ghost – a ghost who does not want to be released yet. The ghost, Julian Diaz, has unfinished business and demands Yadriel and Maritza’s help before he’ll pass on. The story is rife with mystery and emotion as we meet Julian’s family and witness their grief over not knowing what happened to him. It’s a race against time as they rush to solve the murder of Julian and discover who’s been kidnapping teens off the streets before Dia de los Muertos arrives.

This book provides insights into the life of a female-to-male transgender teenager trying to find his place in his family. I loved the culture, magic and love in this book. Aiden Thomas masterfully delivers a story full of magic and meaning that will stay with you long after it ends. If you enjoy this one, you’ll also want to check out his new release Lost in the Never Woods!

She Drives Me Crazy by Kelly Quindlen 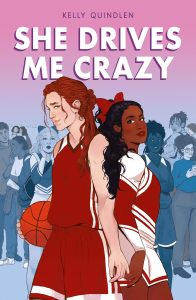 Love 80s music and rom-coms? Obsessed with the fake dating trope? Then this might be the sapphic love story you’ve been waiting for! Crank up the Fine Young Cannibals’ She Drives Me Crazy and dig in!

Scottie Zajac is entering her senior year of high school with a lot on her mind. Namely, her broken heart. She was dumped by her ex-girlfriend Tally, whose new basketball team just crushed Scottie’s team in their game. Scottie is embarrassed by her performance in the game and yearning for one last glance of Tally when she has a fender-bender with Irene Abraham, the head cheerleader and her rival. Tally gets jealous when Scottie and Irene carpool to school while Irene’s car is in the shop.

Irene needs money to continue cheerleading and Scottie wants to keep Tally’s attention so they make an agreement. Everyone is shocked when super popular Irene shows up holding hands with Scottie who is not exactly popular or even popular adjacent. Through this experiment, the former nemeses to get to know each other as people and find this fake dating thing might just be better without the “fake.”

With the title taken from Fine Young Cannibals’ song, I was ready to be impressed and I was not let down. This is a book I rave about to everyone, including all you fine readers. I cannot tell you how much I loved this book. It uses one of my all-time favorite romance tropes of enemies fake dating. Quindlen also highlights communication, healthy relationships and the importance of being honest with yourself.  If you love this book as much as I do, check out Kelly Quindlen’s other work including Late to the Party.

Out of Salem by Hal Schrieve 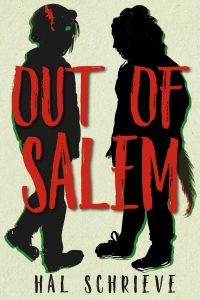 Z is dealing with a lot. Our fourteen-year-old genderqueer protagonist is the lone survivor of car wreck that killed their entire family. Well, survived might not be the best way to describe it. Z woke up undead. As an underage zombie they need to be registered and to have a caretaker responsible for them in case they lose their mental capabilities and try to eat someone. Life is a whole new kind of difficult for Z.

This seems like a good point to inform you this isn’t unheard of in their world that is rife with magic. Essentially all kinds of magic are present in their world and magic is taught in public schools. What’s less acceptable is the diverse magic such as werewolves, vampires, fey and shapeshifters. There is a lot of cultural distrust surrounding these beings and it is enforced by laws and politics.

Our other protagonist is Z’s classmate, Aysel. Like Z, Aysel is existing on the outskirts of acceptance in their school. She’s overweight, loud and opinionated. Aysel is also an undocumented werewolf, which is top secret. Z and Aysel never interacted before Z’s death, but they’re forming a new friendship full of the acceptance they both crave. They support each other through the growing unrest in Salem and increased danger in the wake of a murder.

At first glance this book appears to be overwhelming with the amount of plot points battling for attention. However, once I began reading  it  all fit into place. Let’s talk about pronouns! The author of this book, Hal Schrieve, uses the pronouns Xie and Hir, while our genderfluid protagonist uses they/them pronouns. This book has great discussion on pronouns and insight as to why it’s important to use an individual’s personal pronouns. Overall this book was a riveting read. I also enjoyed the diversity and underlying messages. 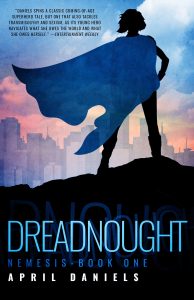 Imagine you live in a world with superheroes and villains who occasionally battle in the sky or in the street. Now imagine you’re accidentally present for one of these fights and a dying superhero bequeaths you his mantle of power. This is the bare bones origin story of our Dreadnought (the name is passed along with the powers). Danny Tozer is hidden in an alley, painting her toes, when the sounds of a battle catch her attention and Dreadnought falls from the sky. She drags him to safety and he passes on his powers to her right before he dies.

The powers transform Danny giving her the body she always wanted. The perfect female body. Danny has been living her life as a closeted transgender female, still being perceived as male by her family and her best friend. Now that Danny has an obviously female body her ability (and desire) to hide her true self is gone. Danny’s father is furious and wants to fix her. Her mother doesn’t provide any support, she just defers to Danny’s father. Meanwhile, Danny’s best friend thinks he has the right to date her – that he deserves to date her – even though she’s not interested in him or any men. Then there’s that whole pesky superhero powers thing. She’s facing transphobia all around and still has to deal with the villain who killed Dreadnought and is trying to take over the world.

While superheroes are not normally a topic I gravitate toward, I am so happy I read this one. This book is something truly special. It was an emotionally gripping read with a wealth of insight into this trans character’s journey. I 100% recommend this read!

Keep your own Pride Parade going with these books! Memoirs, nonfiction, and some of my favorite queer fiction! What are your favorite Pride reads?