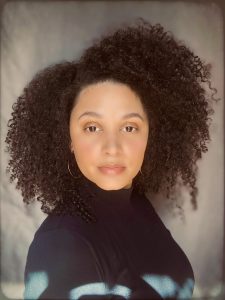 Y’all, I am excited to say the least. New York Times bestselling author Kalynn Bayron will be here at the library on October 13! If you haven’t read any of her works yet, you have time. I am going to give you the rundown on all of her amazing books that have been released – and we’ll take a look at upcoming releases. Specializing in Black girl magic and with an upcoming release of a classic retelling, Kalynn Bayron is one to watch. Live. In person. On Thu, Oct 13. Put it on your calendar! 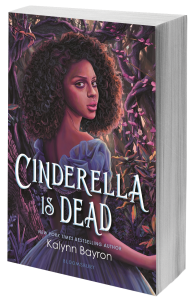 Cinderella is long dead, but her story lives on in the world of Bayron’s first book. However, this is not a charming bedtime story. It is law that each young girl must follow the Cinderella tradition of attending a Royal Ball and presenting herself to the eligible men of the kingdom. Each family prepares for the ball by spending outrageous amounts of money to attempt to make their daughter stand out. Failure to marry does not free a young woman from the tradition but rather dooms her to a dire fate.

Our protagonist, Sophia, is one such young woman. She has no desire to marry any man or attend the ball. Sophia has seen the marriages women suffer. She is also in love with her best friend, Erin. Marrying another woman? Definitely not allowed.

Sophia has choices now. Does she try to return to a home that will take them away? Will she return to a love who will always be out of reach? Or does she attempt to unearth the long-buried truth and free the women of the kingdom? Bayron’s writing is a revelation! She keeps readers riveted throughout this oh-so-wrong fairy tale and demonstrates the importance of self. This is also available in Spanish as Cenicienta ha Muerto.

This Poison Heart and This Wicked Fate 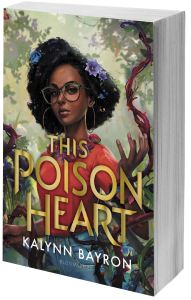 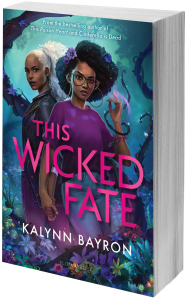 Briseis has always been able to manipulate plants and growing things. Flowers, trees, even grass responds to her presence. Briseis and her adoptive mothers work to hide her power and influence over plants to keep her safe. Out of seemingly nowhere, a lawyer shows up to inform Briseis and her family that her biological aunt passed away and she inherited the rundown family home. After discussion, they decide to spend the summer fixing it up.

The house offers more space and more privacy than Briseis and her family had in their small apartment in the city. This affords Briseis the opportunity to experiment with her powers and see what she is really capable of. The expansive gardens on the grounds enable her experimentation and almost seem to be waiting for her. Inside the house, among the dilapidated mess, lie secrets about her biological family’s history and clues to unravel the mystery of the magic in Briseis’ veins. Despite all this opportunity, all is not peaceful. Quite the opposite. The family deals with intruders on the property and a nefarious plot revolving around Briseis.

This duology incorporates Greek mythology and Black girl magic in the best way possible. This Wicked Fate, the sequel to This Poison Heart, picks up with Briseis seeking a magical plant to save a loved one. This adventure has the highest of stakes and she’s not alone in her quest. This duology will enchant you. It is a pulse pounding adventure matched with the heart of coming-of-age. You will root for our heroine and you should also prepare to cry. This is a must read! You can catch the series opening in Spanish as Este Corazon Venenoso.

Out There: Into the Queer New Yonder edited by Saundra Mitchell (Featuring an original story by Kalynn Bayron) 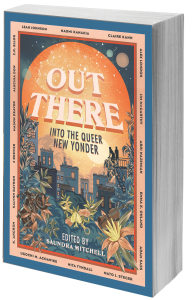 Out There: Into the Queer New Yonder differs from any of the other works on this list as it is an anthology, meaning a compilation of short stories from different authors. This particular anthology grouped stories together around the loose theme of Sci-Fi and features a diverse array of protagonists in compelling tales. I am a really big fan of anthologies and this one is no different. There were a number of standout stories in this mix for me, including H O M E by K. Ancrum and Renaissance by Emma K. Ohland.

What we’re here to talk about, of course, is Kalynn Bayron’s story in this anthology. It is titled The Department of Homegoing Affairs and will both pique your interest and tug at your heart strings. In the story a young woman deals with her grief at losing her grandmother. She has the ability to see through the “veil” and decides to work with the Department of Homegoing Affairs to better hone her skills so she can aid her grandmother in passing over from limbo. This achingly beautiful tale will leave you with the good kind of tears. Keep those tissues close! 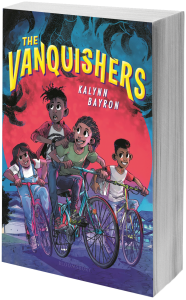 Later this very month, Bayron’s first middle grade novel will debut! And, what could be more exciting than a young group of Brown protagonists, called the Squad, teaming up against vampires? Though the general public thought the threat was vanquished long ago, the families of Cedrick, Jules and Boog have kept their guard up and stayed aware of the threat. Now that a child has gone missing, the squad is on the case, determined to rescue him. We’ve got this one on order and you can put it on hold! 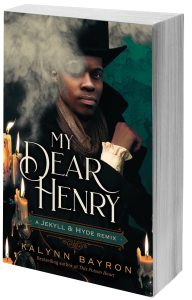 Mark your calendars for March of 2023. That is when Bayron’s remixed classic of Dr. Jekyll and Mr. Hyde will be released. In this tale a teen boy tries to discover the reason behind his best friend’s disappearance―and the arrival of a mysterious and magnetic stranger―in misty Victorian London.

You’re Not Supposed to Die Tonight

Not even the cover for this one has been released yet! Prepare yourself for Bayron’s first YA horror novel, expected to be released in June 2023.

The thing about Bayron’s books is that they are nearly always checked out. That’s why I’ve assembled a list of read alikes for you. Place a hold on Bayron’s books and check out the additional suggested titles!