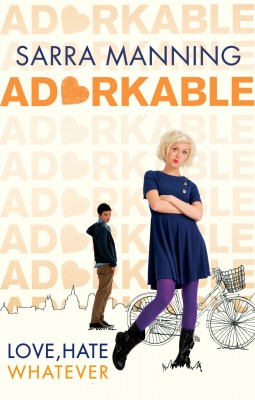 Jeane Smith’s a blogger, a dreamer, a dare-to-dreamer, jumble sale queen, CEO of her own lifestyle brand and has half a million followers on Twitter. Michael Lee’s a star of school, stage and playing field. A golden boy in a Jack Wills hoodie. They have nothing in common but a pair of cheating exes. So why can’t they stop snogging?

Sure, it’s a teen romance, but why this is one different:

Jeane Smith uses technology, maybe too much. She lives alone in a flat in the UK while she studies for her A-levels (British high school). She is also a hardworking international celebrity. She survives mainly on Haribo candies and wifi. She’s bossy and snarky and unlikable and unattractive. She feels unpopular at her school, and has no chemistry whatsoever with her boyfriend. And she is a self-professed dork, embracing it in all the awkward, obscure, uncomfortable glory.

Chock full of British teen references, you’ll wonder if an actual teenager is writing it and be reassured to discover that the author, Sarra Manning, has worked on teen pop culture and fashion magazines in the UK. The whole Adorkable thing that Jeane Smith is rocking in the novel will probably send you straight to google it. You might wish you could connect with other people as dorky and adorable as her – and as you – but alas, this is a fictional story and you will have to find your bliss (and pictures of pugs on surfboards) without the help of Jeane Smith’s media empire.

If you like trendy teen fiction that makes you wish the characters were real so you could text them (or at least retweet them) you might enjoy other books by Sarra Manning, John Green, Rachel Cohn, Kody Keplinger or Stephanie Perkins. Check the library catalogto find your next crush. I mean, book.