Hello, fellow artists! I am taking over Teen Art Club this week and we are going to make optical illusion drawings. Optical illusions are works of visual art that fool our eyes into seeing something that isn’t there. In this case, there will be a 3D effect in our drawings, even though we’re drawing on a flat surface in 2D. Drawing these illusions isn’t as hard as it may seem. Let’s put on some good tunes and get in the zone.

Place a single dot anywhere on your piece of paper. This will act as your vanishing point (the point at which receding parallel lines viewed in perspective appear to converge). 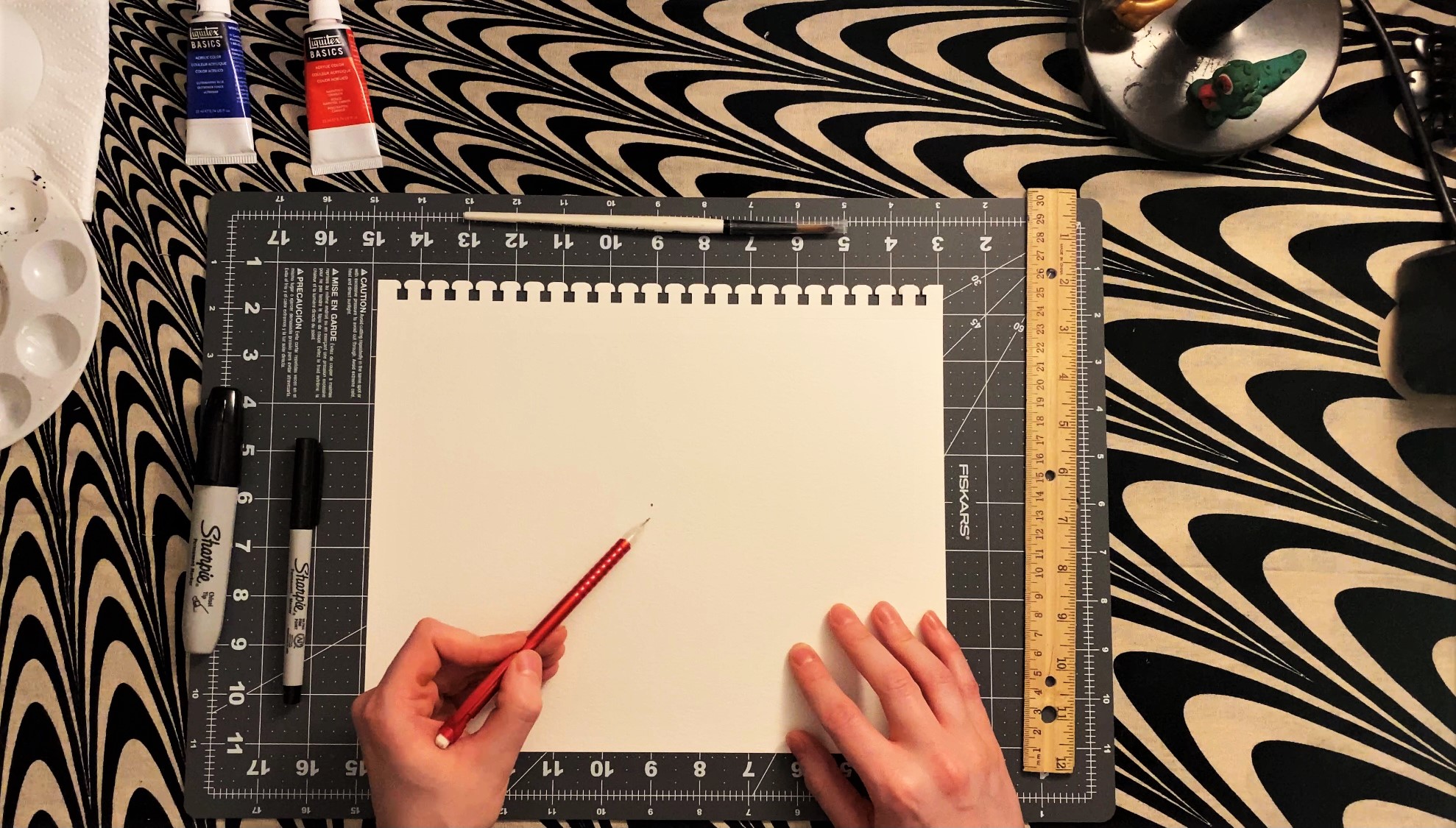 Using your ruler, draw an even number of lines extending outward from the dot to the edges of your paper. Follow all the way around until you have a bit of a circle. (Tip: Try not to leave any big gaps in between each line, as smaller gaps will enhance the illusion’s effect!) 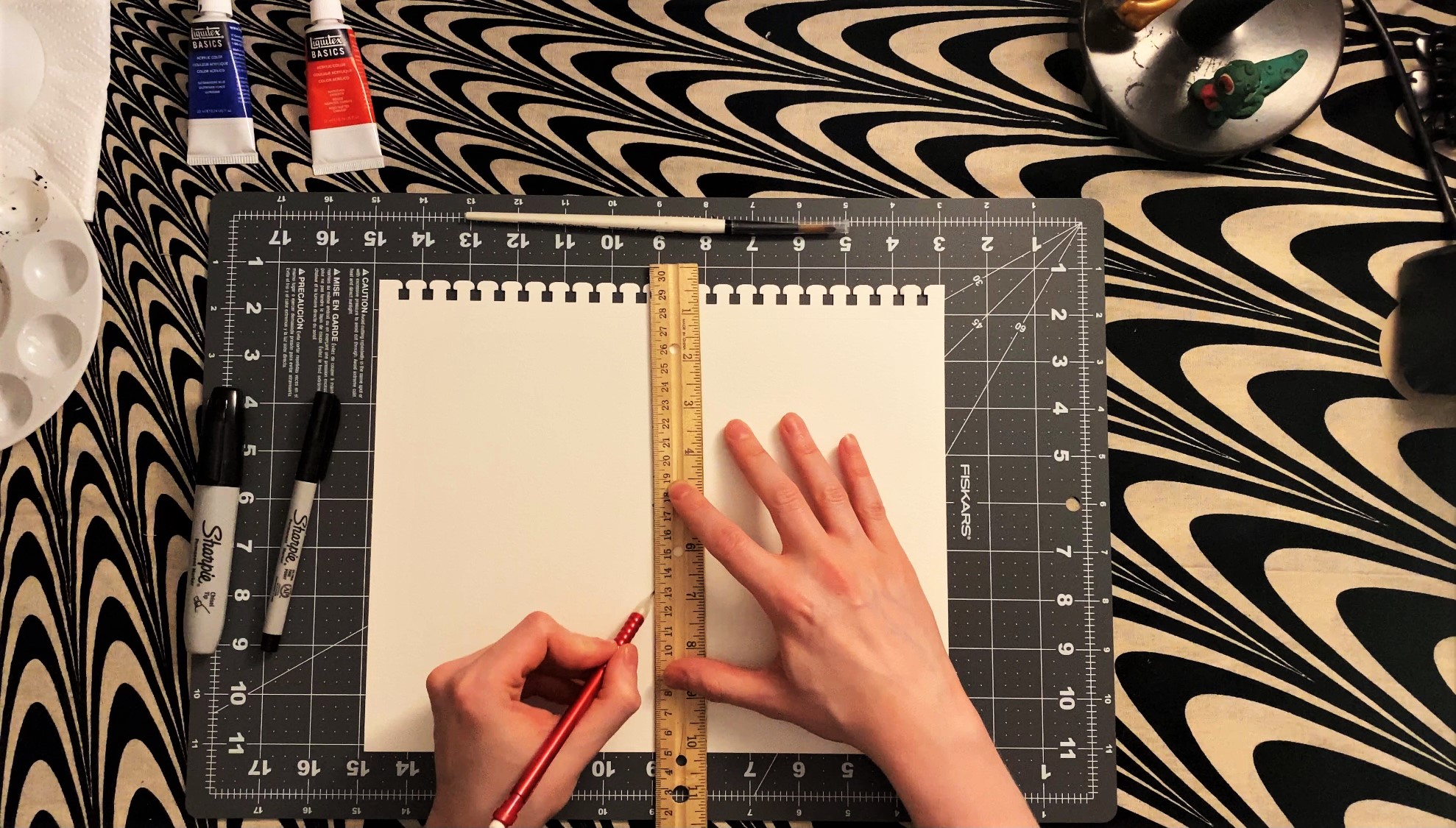 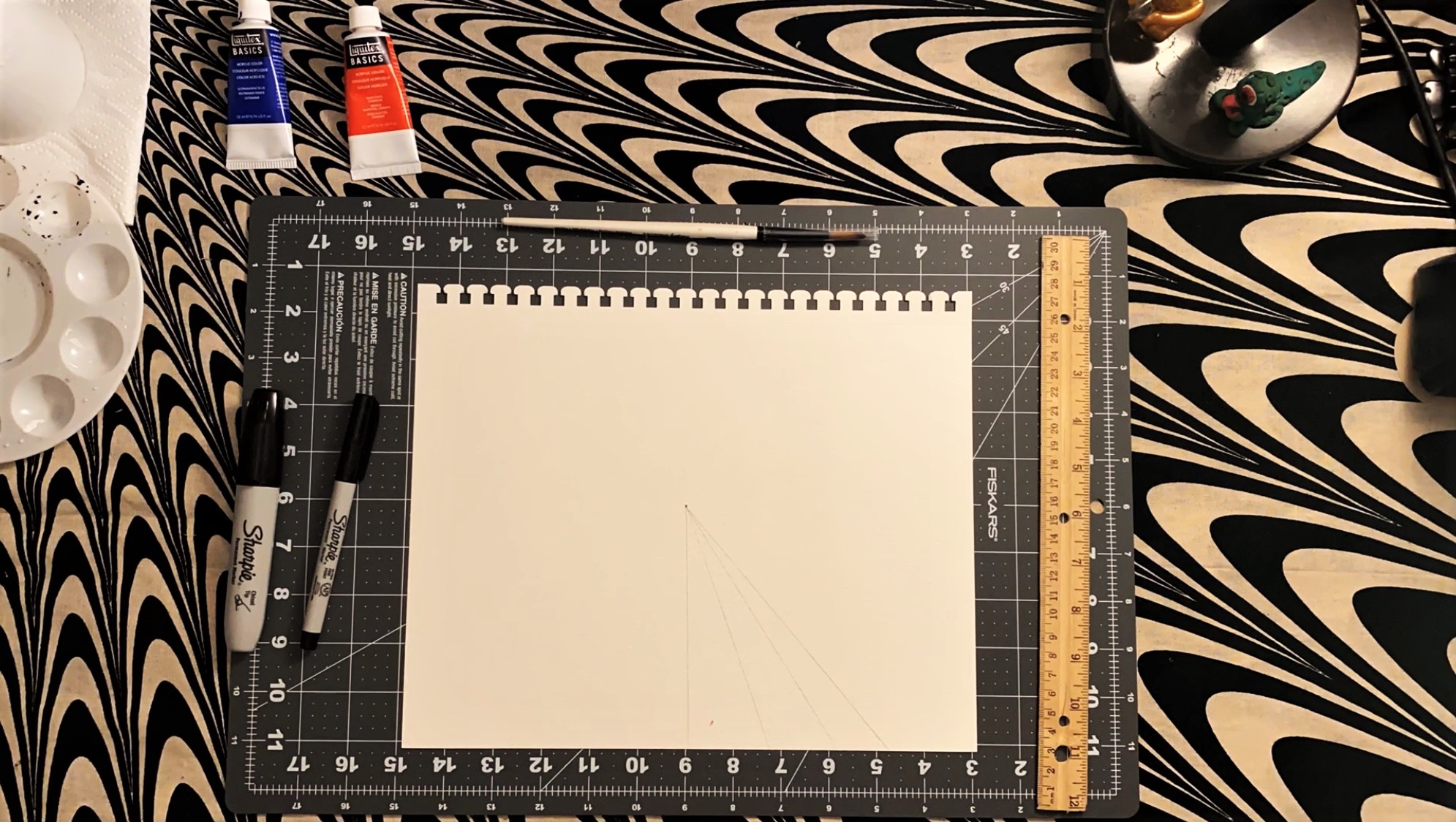 Draw a curved line in between each column (like a spider’s web). Repeat this until you get to the edge of the paper. Then, in the next column, draw a similar curved line in the opposite direction as shown below. Repeat all the way around the circle. 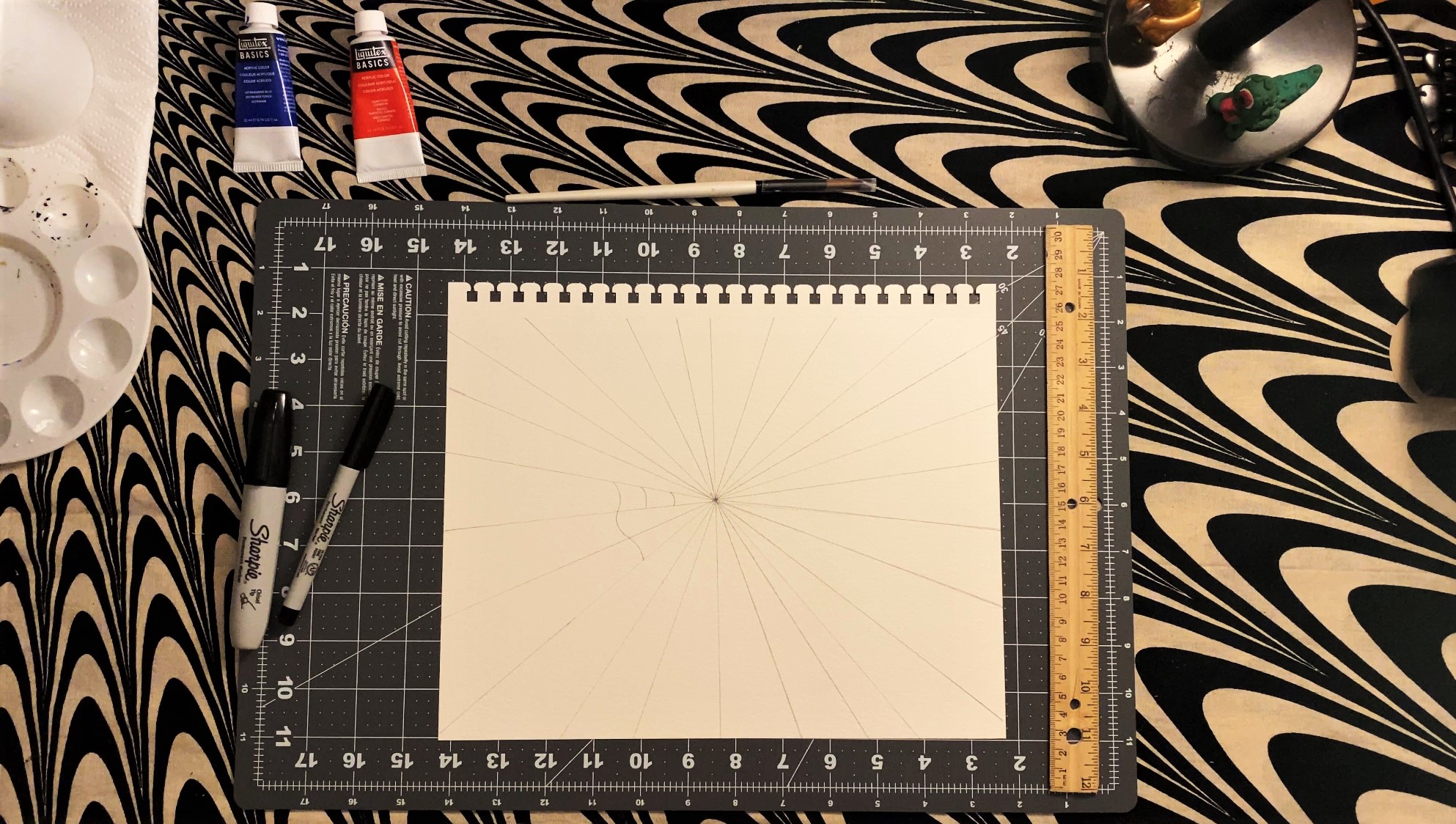 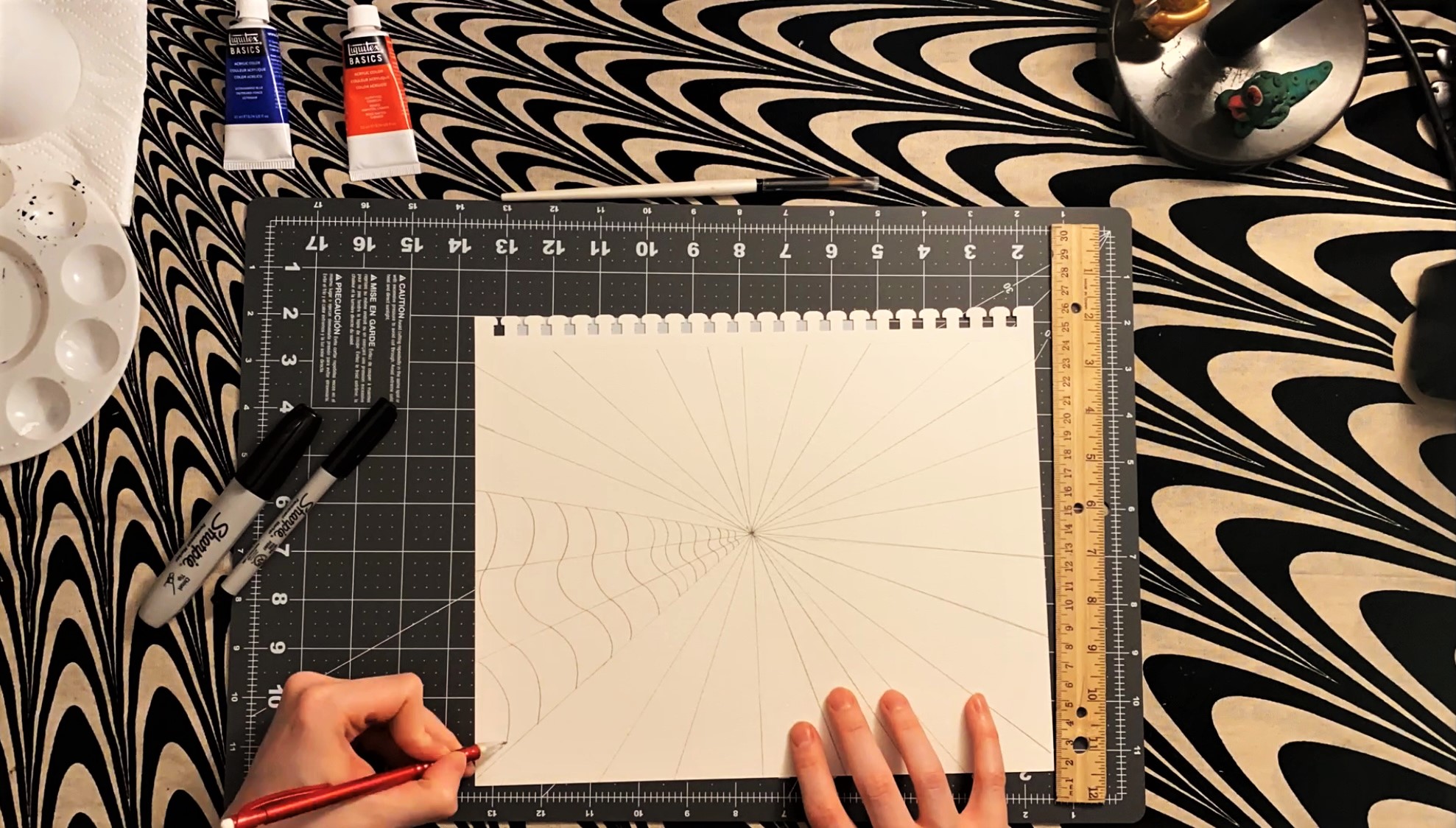 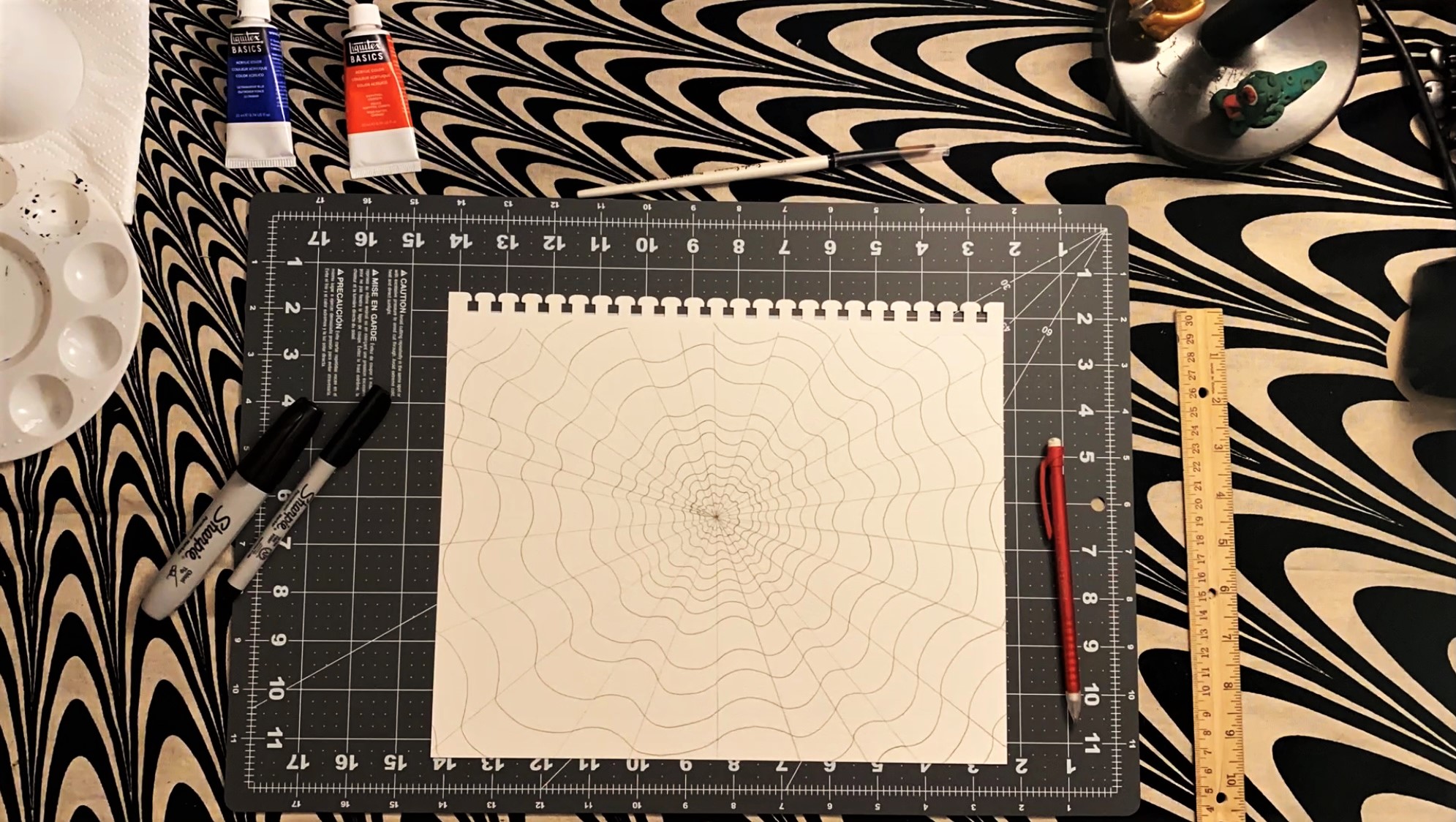 (You can see I initially forgot to include an even amount of lines in this example, which led to a little bit of improvising!)

In a sort-of checkerboard pattern, fill in every other block in a row or column with one color. There should not be any two blocks directly to the left/right or above/below each other with the same color. You can do two different colors, or use one color and leave the other blocks blank (or white).

It doesn’t matter what you use to fill in these blocks, but marker seems to have a bolder touch than paints, as we will see toward the end! 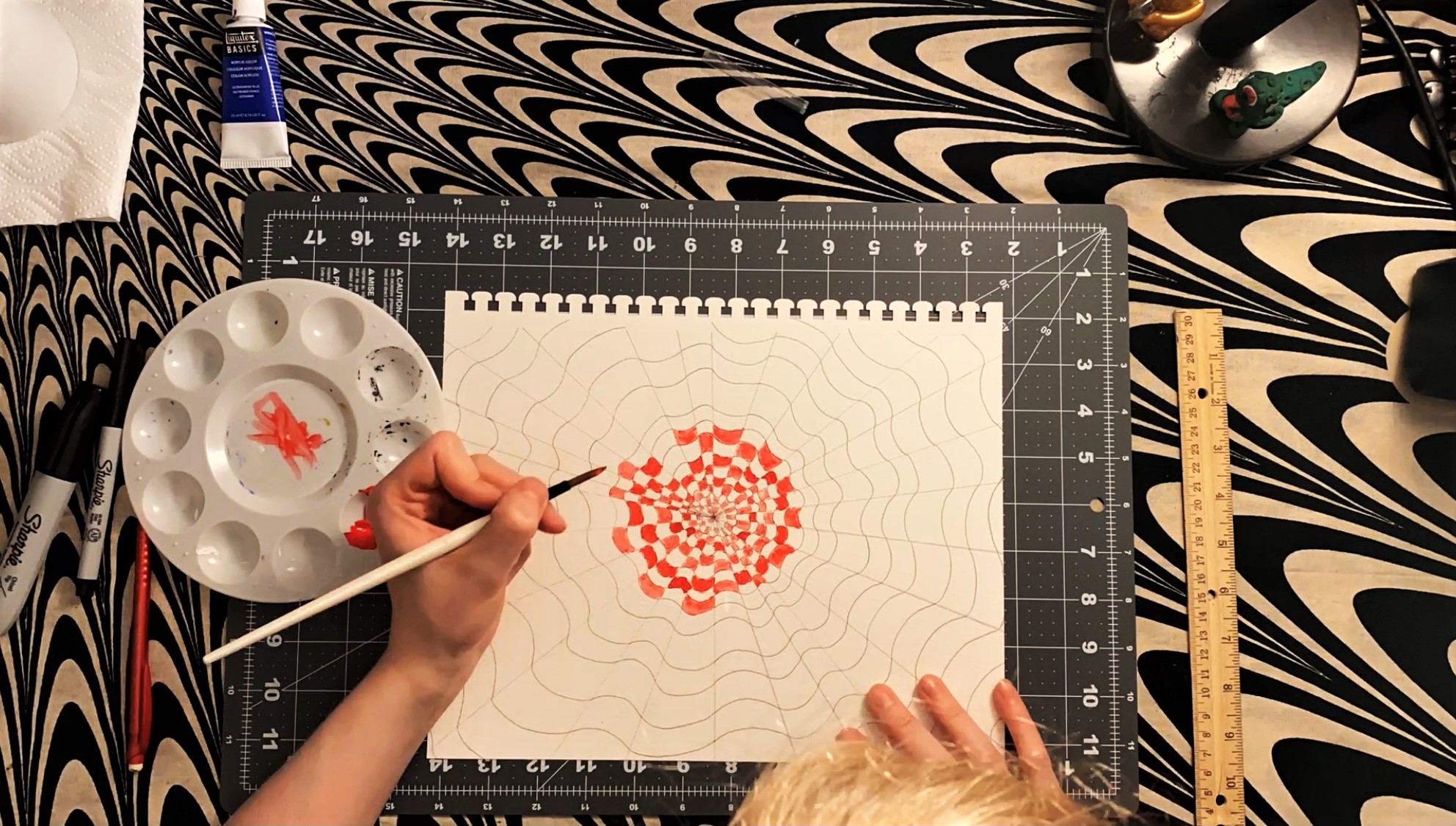 Pay close attention to your pattern! Try sticking to one row or column at a time if you start to feel overwhelmed. 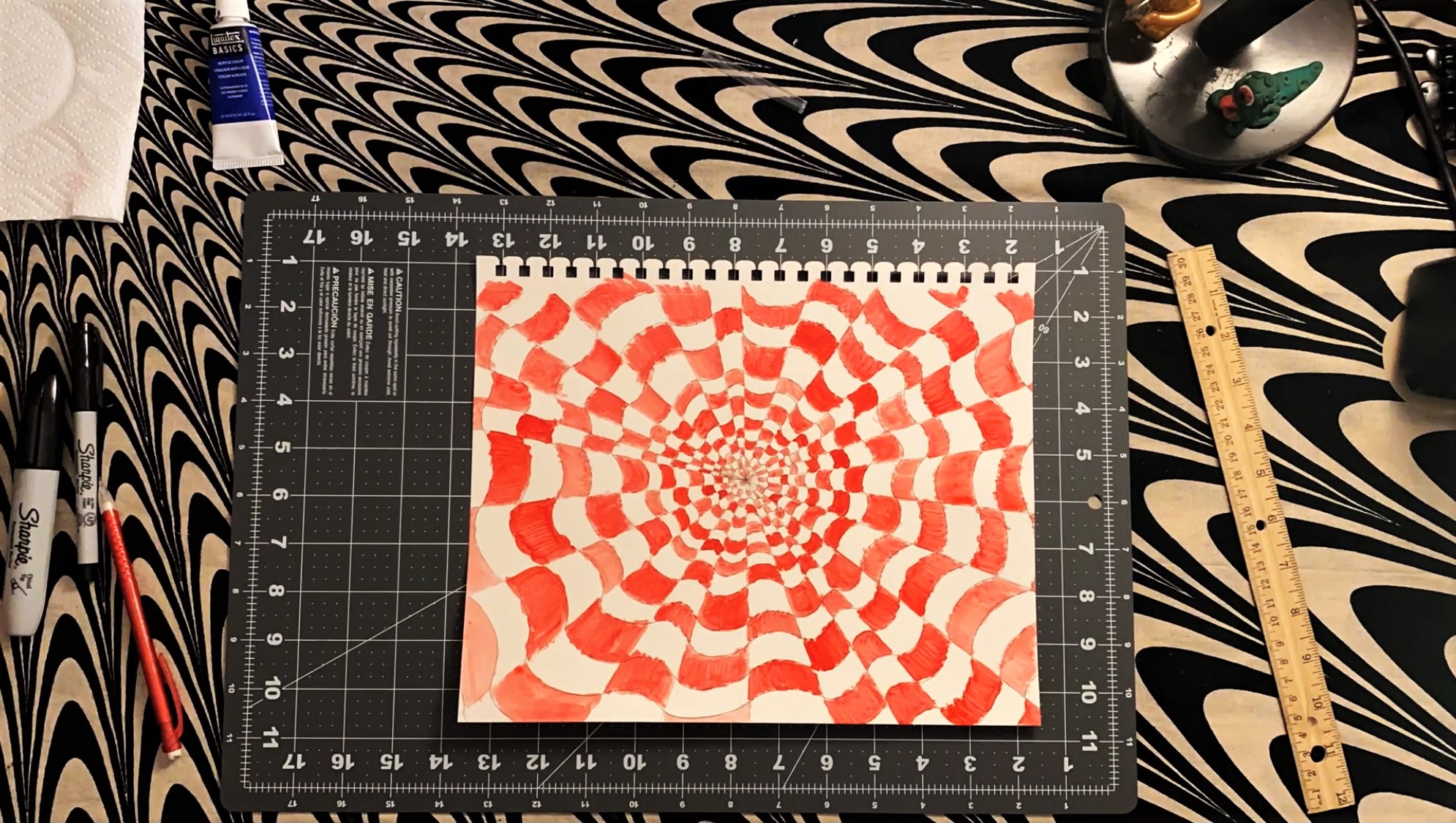 It should look something like this once everything has been filled in.

Retrace the outlines you made in pencil with a pen or thin black marker.

If you used a marker or pen at the beginning, you won’t have to worry about this step. Since I was using paint to color in the blocks, I decided to save this step for last so my outline wouldn’t get painted over. 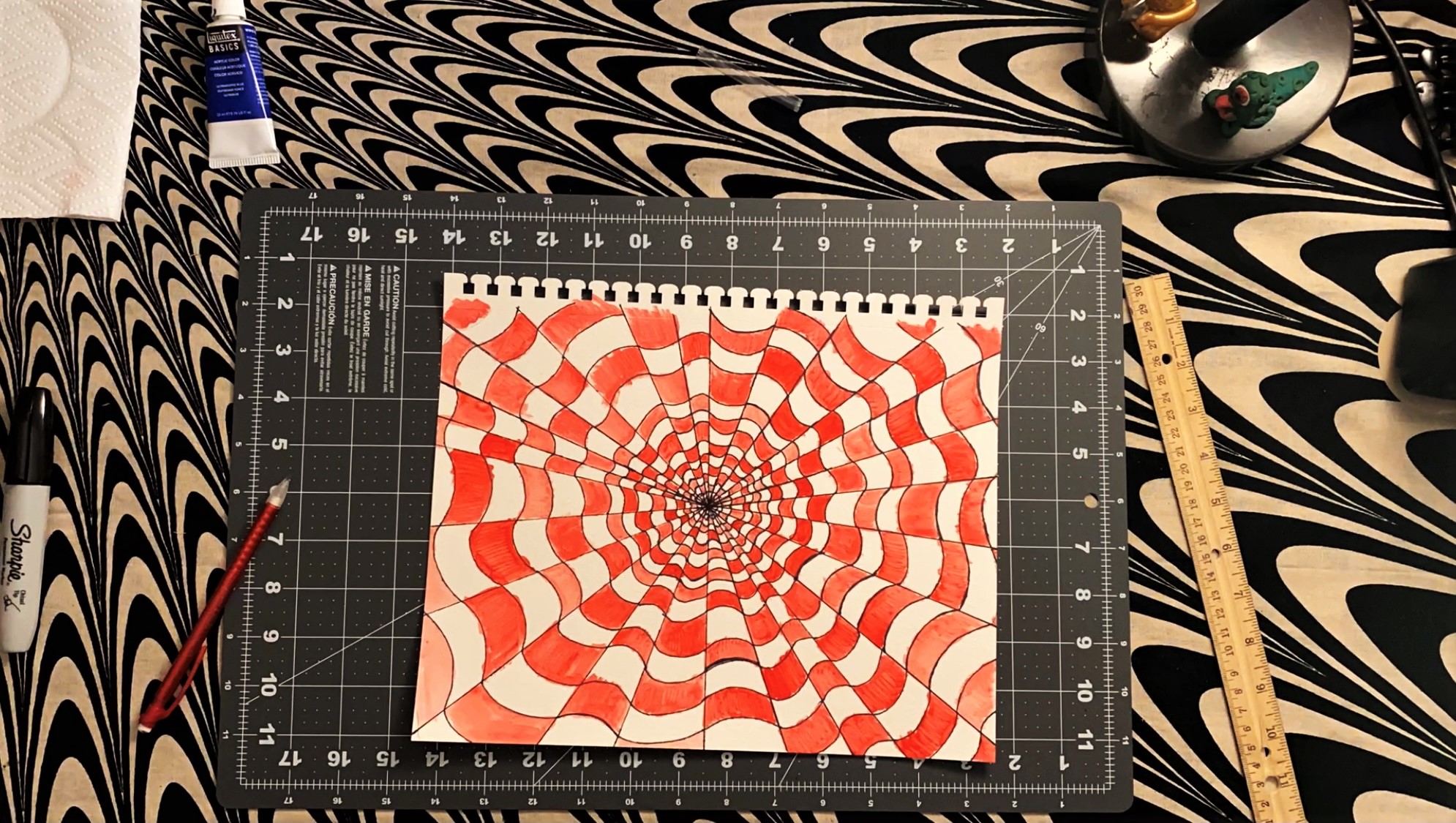 The bold lines go a long way in making this illusion POP!

Voila! You’ve completed an optical illusion drawing! If it didn’t turn out quite the way you wanted, try playing around and using different tools to change the look of your illusion.

For example, an optical illusion drawing that I made with black permanent marker gave the lines a bold look and contrasted the two colors well with each other. 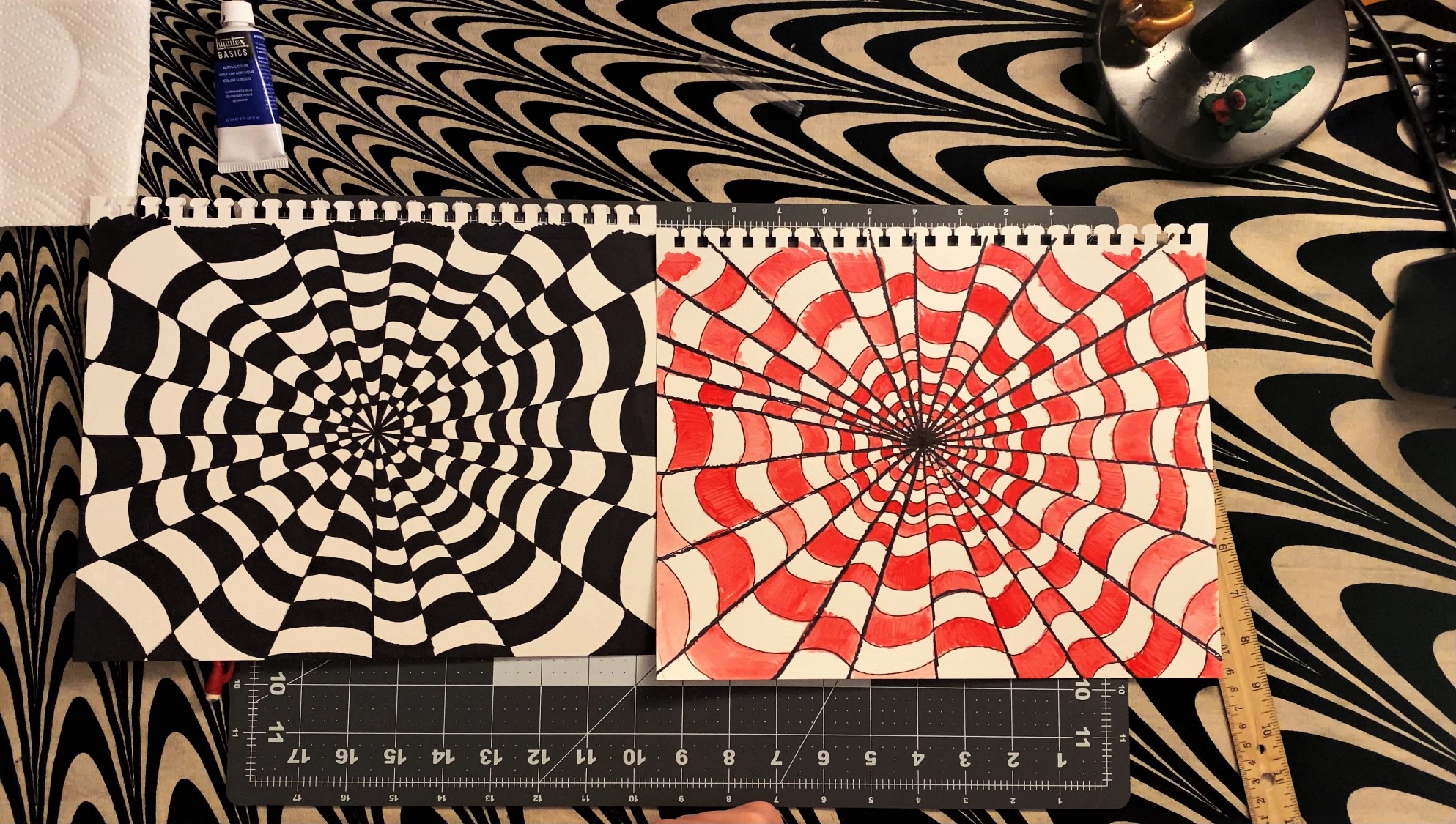 As long as you follow the basic instructions of this tutorial, you can adjust this exercise in a variety of different ways and create your own wild illusions.

If you had fun with this one, look up more optical illusions online (or check out the list below) and see what you find. Enjoy drawing and we’ll see you next time!

Kody is a Youth Librarian who primarily works with teens. He is also a writer and photographer, and drank several cups of coffee while writing this post.