Hey writers! If you could change one thing about the world, what would it be? How do you think that one thing would impact the rest of the world? Would it have a ripple (or butterfly effect) on anything else?

Writing fiction deals with a lot of these questions, because writers are often merging their fictional elements with real-world environments. Even though the stories are made up they usually take place in our familiar world, complete with the laws of gravity and physics as well as our languages and societal norms. But when we change something in our world it impacts other things as well.

Science fiction stories often change a specific thing about our world (or take us to a new world altogether) and subvert our expectations. This makes us wonder what will happen next or how everyone will be affected by this change.

Take a story like The Hunger Games, which focuses on a televised fight-to-the-death between different groups of kids. Think about how the rest of the world is changed by this event. It would be strange if there wasn’t any change at all considering how big of an event this is in the story (along with the other details that made the Hunger Games possible in the first place). 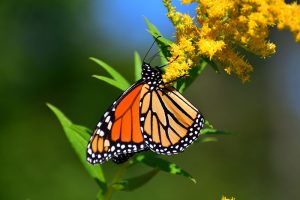 As a simpler example say one day there were no longer any weapons in the world. How would this affect wars? Crime? Our police? One change, no matter how minor it may seem, can have major consequences.

This phenomenon is known as the butterfly effect. The name comes from the idea that the smallest change, such as the flapping of a butterfly’s wings, causes a major effect.

Although I’ve mentioned a couple of dramatic examples here, the change could be anything! What if schools closed for a week without warning? What if your character saved a real person’s life? What if it rained for an entire month?

Whether you’re writing the next fantasy epic or simply placing characters into our real world, there is a merging of fiction and reality. The things your characters do will impact the people and environment around them. Imagining what these impacts could be is part of the fun of creating a story!

To start think of a way you would like to change the world. Try not to get overly complex but think of something small that could have a big impact. Then write about how that change could affect everything around it. Afterward if you want to share what you’ve written or would like some feedback on your work, please submit your stories to teenwriters@tscpl.org. Happy writing!

Kody is a Youth Librarian at TSCPL who primarily works with teens. He enjoys music, writing, photography, and lots of coffee in his spare time. Don't hesitate to say hello!