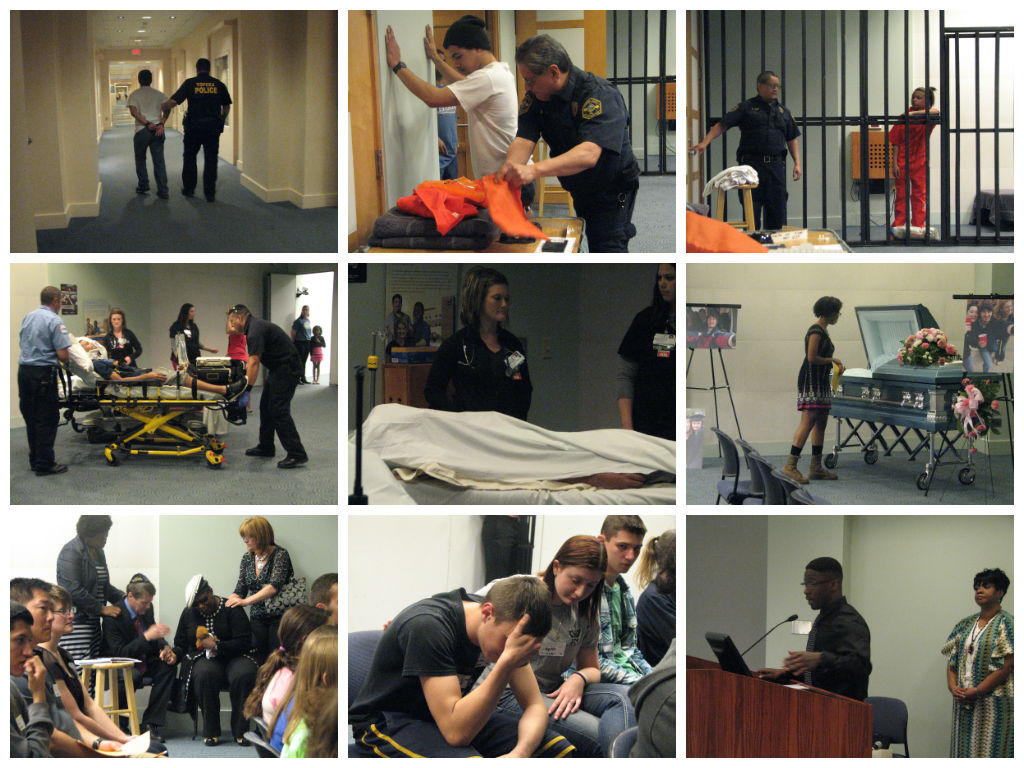 Topeka teens saw the harsh realities about drug and alcohol abuse during dramatizations including arrest, jail, overdose and funeral scenes.

Over 150 local youth and parents saw first-hand the harsh reality of substance abuse on March 30 and 31, 2014 at the Prevention and Recovery Services (PARS) Reality Tour, which delivered a straight-forward approach to education and prevention.

A recent survey showed 43 percent of Shawnee County youth reported that they have drank beer, wine or hard liquor at least once in their lifetime.

Moving with their tour director from room to room at the Topeka and Shawnee County Public Library, teens watched actors stage several dramatic scenes including a drug arrest, jail intake, overdose and emergency room, and funeral. View all of the photos from the event. Strategies for making healthy choices and finding local resources for support were presented after the tour, where teens also listened to a real recovering addict. Parents were encouraged to attend with their teens as the families witnessed emotions and turmoil caused by alcohol and drug use.

“The library is the information and resource hub of the community. We wanted a non-judgmental place youth 10 years and up could come to,” said Sheyvette Dinkens, PARS addiction counselor. “We hope attendees understand what it’s really like to get booked into Shawnee County Juvenile Detention Center or what a real emergency room scene is like.”

Each teen participant also received a personalized souvenir – a digitally morphed photograph of their own face, to show the possible effects of drug abuse. The library’s Teen Advisory Board and other volunteers asked each teen to “smile big for the camera” on their way into the program, then used online software to smudge dark circles under eyes, push back the hairline, pinch in cheeks, give the face a sunken look, give teeth a yellow or grey tinge, and add open sores and scratches to foreheads and chins.

When teens picked up their morphed photos, they were just shocked at their appearance. Some tried to claim it couldn’t happen to them. I described the photos on the Faces of Meth website and encouraged them to see for themselves. One beautiful young woman exclaimed happily “Oh, mine still looks good!” so I pulled her aside to explain that her image might not look awful but that, sadly, the image didn’t show the brain damage.

Other library customers were drawn to ask questions about the program by the sound of an ambulance delivering the overdose victim, the increased number of police officers, and the hospital bed and casket in the library. Community support for the event included local leaders and students as actors in the dramatizations and businesses like Stormont-Vail Healthcare, Penwell Gabel Funeral Homes and Porterfield’s Flowers and Gifts provided props for the hospital and funeral scenes.

The Reality Tour helped begin conversations about the consequences of substance abuse.   The Topeka Capital Journal and WIBW both covered the event. You might want more information after seeing the photos from the Reality Tour.

As Health Information Librarian, I recommend I’ve Got this Friend Who… and The Dirt on Drugs for teens who want more information about drug prevention. The library also has books on smoking cessation, stress and mental health issues. Check out the many resources in the Health Information Neighborhood in the West Wing.