How to Make a Volcano

NOTE: This should be done outside due to the mess.

A chemical reaction between vinegar and baking soda creates a gas called carbon dioxide. Carbon dioxide is the same type of gas used to make the carbonation in sodas. What happens if you shake up a soda? The gas gets very excited and tries to spread out. There is not enough room in the bottle for the gas to spread out so it leaves through the opening very quickly, causing an eruption!

How does a volcano really erupt?

Deep within the Earth it is so hot that some rocks slowly melt and become a thick flowing substance called magma. Since it is lighter than the solid rock around it, magma rises and collects in magma chambers. Eventually, some of the magma pushes through vents and fissures to the Earth’s surface. Magma that has erupted is called lava.

Some volcanic eruptions are explosive and others are not. If magma is thin and runny, gases can escape easily from it. When this type of magma erupts, it flows out of the volcano. If magma is thick and sticky, gases cannot escape easily. Pressure builds up until the gases escape violently and explode. In this type of eruption, the magma blasts into the air and breaks apart into pieces called tephra. Tephra can range in size from tiny particles of ash to house-size boulders.
(Source: United States Geological Survey) 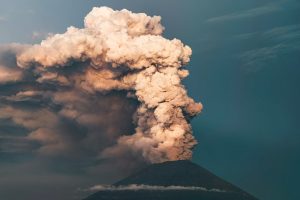 Eruption. Clubs of smoke and ash in the atmosphere. 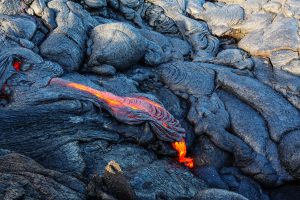 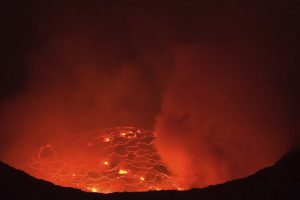 Mouth of the volcano with magma. Molten magma in the muzzle. 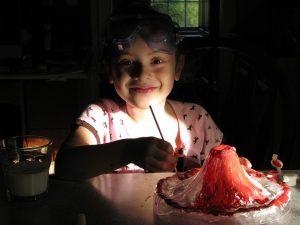