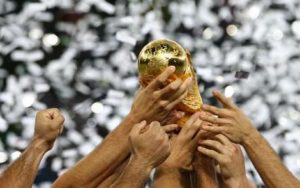 Every four years arguably the greatest sports event takes place and soccer gets to crown its world champion. An estimated one billion people tuned in to the 2014 World Cup final.  Normally I get very excited about the World Cup. I watch every game the United States plays and cheer loudly. Unfortunately, on Oct 10, 2017 U.S. soccer lost to Trinidad and Tobago 2-1 ending their hopes of going to the World Cup in Russia. It will be the first time since 1986 that the United States will not participate. Although I was devastated then I am finally getting excited about this year’s tournament and I will still watch quite a few games. Here are a few teams I will be watching and you might want to keep an eye out for too.

Iceland – If you like underdogs then this is your team.  This will be Iceland’s first ever trip to the World Cup and only their second major tournament (they made it to the quarterfinals of the European Championship in 2016) They have a great chance to get out of their group with the other four teams being Argentina, Croatia and Nigeria. If you’ve never heard their “Viking Thunder Clap,” you are missing out.

Egypt – This is another big underdog. They have qualified three times for the World Cup, but this will be their first appearance since 1994. You definitely should check them out because they have one of the best goal scorers in the world in Mohammed Salah who plays his club football for Liverpool and was the top goal scorer in the English Premier League last season with a record breaking 32 goals. Their group consists of Russia, Uruguay and Saudi Arabia.

Argentina/Portugal – I’m cheating a little with this one. I put these teams together because they both have the two best players in the world -Argentina’s Lionel Messi and Portugal’s Cristiano Ronaldo. With all the trophies both players have won for club and country neither has won the World Cup. Messi came the closest four years ago with Argentina losing in the final to Germany. Both players are now in their 30s and don’t have many World Cups to go. This might be the best chance for both.

Colombia – With a fifth place finish in the 2014 World Cup Colombia is primed for another deep run. But, don’t take my word for it, our own Judy Espinosa-Gonzalez is a native of Colombia and will tell you exactly why you should cheer them on this summer.

“The players give themselves totally to the game and don’t give up until the last minute because they love their country,” said Espinosa-Gonzalez. “Their most important players are James Rodriguez, the top scorer of the 2014 World Cup, and Radamel Falcao, the team’s captain.”

The tournament starts June 14 and runs through July 15.

Megan is a Public Service Specialist in the Library's Red Carpet Department. When not delivering books to the local community, she loves to read spy novels and any historical non-fiction she can get her hands on. She is also an avid fan of college basketball and soccer.