On September 10th at 7:00 pm Negro Leagues historian and author Phil Dixon will speak on the history of the Kansas City Monarchs.  Dixon’s talk will not only include the history of this team but some surprising ties that the Monarchs have with Topeka.  The event will take place at the Bettis Family Sport Complex Event Center, Lake Shawnee 3025 S.E. Croco Road–Topeka.

If you don’t know about the Monarchs here is a little background. 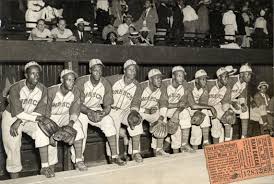 Long before the Royals took the field, and even before their predeceesors the A’s took the field the Kansas City area and nearby cities and towns could claim one of the most dominant professional baseball of all-times.  The Kansas City Monarchs, a dominant team in what were called the Negro Leagues.  In fact some of the greatest men ever to play the game called Kansas City home.

Formed in 1920 men like Jackie Robinson, Leroy Satchel Paige, Hilton Smith, and a man called the best player in the Hall of Fame Bullet Joe Rogan, all wore the uniform of the Monarchs.  The Monarchs won the 1924 championship and were champs many seasons after that, once the color barrier was broken the Monarch organization sent the most players of any team to the Major Leagues.

There is a rich but largely unknown history between this team that called Kansas City home and Topeka and communities nearby.  I suppose due to the fact the players always were looking to make extra money barnstorming tours were arranged and the team would play in smaller towns all around the area.  No doubt Topeka was once such city.  Here are couple of snippets of Monarch and Topeka trivia.

August 4 , 1939— Olympian Jesse Owens gave a “running exhibition” following a Negro American League contest in Topeka between the Kansas City Monarchs and the Toledo Crawfords. He ran a 100-yard dash in 9.8 seconds, and circled the bases in 14 seconds. Owens, who was affiliated with the Crawfords, was a guest of Elisha Scott during his Topeka stay.

You will have a chance to learn more about the legendary team and its ties to Topeka.  Mr. Dixon is widely held to be one of the foremost experts on baseball history.  He was a co-founder of the Negro Leagues Museum in Kansas City, and has authored 6 books and countless articles about the history of the Negro Leagues

There is no charge to attend this event.  Again mark your calendars for September 10th at 7:00 p.m.  The event is co-sponsored by the Shawnee County Baseball Hall of Fame, and the Shawnee County Historical Society, with grant support from the Kansas Humanities Council.  For more information contact Tom Ellis 785-260-3236, or Jan Johnson 785-409-1748