Okay let’s face it happily the Kansas City Royals are a relevant team once again.  Last fall was a blast, and all sorts of new fans, young and old are wearing Royal Blue once again.   Personally I have been a die-hard fan of Kansas City Baseball since I was a child.  The predecessors to the Royals the A’s actually played their 1st game in Kansas City several days after I was born 60 years ago.   So to all the people who discovered or to the lost generation who rediscovered the Royals—welcome aboard folks.   Kansas City has a great baseball tradition and now that the ghosts have been awakened there are some things you have to do and know.

Of course you have to know the names of the players buy a Royal blue shirt and cap.  But beyond that there are many things you have to experience to fully appreciate being a fan of the Royals.  I received a book as a gift this Christmas titled: 100 Things Royals Fans Should Know and do Before They Die, written by local author Matt Fulks.  The book is a fountain of knowledge of facts, and stories about all things Royal.  I wholeheartedly recommend it.

Here are 3 of the things the author says you must do.  It will make an affordable long weekend mini-vacation.

Visit the site of the original baseball stadium in Kansas City, 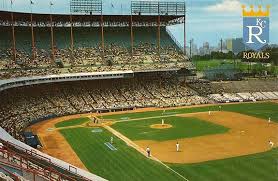 Municipal Stadium located at 22nd and Brooklyn was the home of the Royals until 1973, and before that the home of the Kansas City A’s, the Kansas City Blues, and the Kansas City Monarchs of the Negro Leagues.   There is only a plaque there now.  What used to be a ballpark is now a nice subdivision of housing  at the address of 22nd and Brooklyn Avenue.  As a youngster I will never forget seeing my 1st big league game there, and what I remember was my first glimpse of how beautiful and green the outfield grass was.

Just down the street is the place to eat barbecue in Kansas City the famous Arthur Bryant’s.  Calvin Trillin called it the best restaurant in the world.  Celebrities from Stephen Spielberg to Jimmy Carter have eaten at the 18th and Brooklyn location. Even though the famous and near famous have eaten there Bryants is a place that caters to the common folks.  Just don’t try and order a salad.

Take a trip to the Negro Leagues Baseball Museum.

Every baseball fan should visit this museum.  There you will learn about American History, and Kansas City’s importance to baseball.  There you will see pictures, equipment, uniforms and many other artifacts of the men who played Negro League baseball.  The Monarchs were the Kansas City team. They have gone down in history as one of the premier teams of the league. Players like Jackie Robinson, Ernie Banks, and Satchel Paige all played for the Monarchs.  No telling of the Monarchs rich history is complete without acknowledging the great Buck O’Neil.  You can find information about the museum including its hours, days of operation and costs at an excellent website http://www.nlbm.com/s/visit.htm

This is one truly unique fan experience.  Kauffman Stadium which opened in 1973 is a beautiful facility.  The Royals and their staff have designed tours that run year round. All of the tour packages allow the fan to see the “K” in a way they may not have been able to see before. The basic tour offers you the chance to visit the Royals of Fame, The Crown Club, sit in the Royals Dugout, and see the visitor’s clubhouse.  There are several other tour packages including an all-access package.   The price of the tours vary, but all of them allow you a  behind the scenes look with  plenty of photo opportunities.   Tour schedules, list of tour packages, along with prices are available on the team’s website

That will give you a good start and have some fun.  Of course the library has some excellent books and DVD’s  not only on the Royals, but on the rich history of Kansas City baseball.