Sunday was a tough day in the world of sports. Two prominent sports figures died, one a legend in his sport for decades, and the other just beginning to tap the limitless potential in his right arm.

Of course, I’m talking about one of the all-time great golfers, Arnold Palmer, and 24 year old right handed pitcher for the Miami Marlins, Jose Fernandez. Both were at opposite ends of their lives, but both will be remembered; one for all he accomplished in his sport, and the other for all he might have accomplished.

Arnold Palmer was one of the bright stars of the golfing world in the 1950s and 60s when he won seven majors championships, including four at The Masters. His rivalry with Jack Nicklaus and the duels the two of them had on the links were the stuff of legends, as they went toe to toe on the final day of more than one major tournament.

Above all, Palmer was considered a kind man that his contemporaries, and many of the younger players on the tour right now looked up to and enjoyed spending time with. As Nicklaus said in the statement he released following Palmer’s death:

“We were great competitors, who loved competing against each other, but we were always great friends along the way. Arnold always had my back, and I had his. We were always there for each other. That never changed.

He was the king of our sport and always will be.”

While Jose Fernandez was not the revered figure Arnold Palmer was, that was likely because he simply didn’t have enough time. In his short time in the big leagues, the 24 year old Fernandez won the NL Rookie of the Year, was selected to two All-Star Teams, and was quickly becoming one of the most feared pitchers in all of baseball.

All of this while being considered one of the nicest guys anyone would ever want to meet, as well as one of the games most charismatic, young stars. Yesterday during a news conference, his coach, Don Mattingly, was in tears speaking about what he will remember about Fernandez:

“When I think about Jose, I see such a little boy. The way he played, there was just joy with him.”

Both men will be missed.

Here are some items from our collection about Arnold Palmer, as well as athletes that died before their time:

A Life Well Played: My Stories by Arnold Palmer

At the Altar of Speed: The Fast Life and Tragic Death of Dale Earnhardt by Leigh Montville

Munson: The Life and Death of a Yankee Captain by Martin Appel 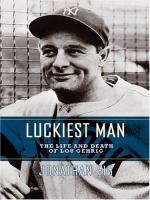 Luckiest Man: The Life and Death of Lou Gehrig by Jonathan Eig

The Mozart of Basketball: The Remarkable Life and Legacy of Drazen Petrovic by Todd Spehr