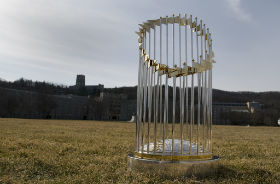 Anyone who knows me well, knows I’m a huge Chicago Cubs fan. So obviously, I was ecstatic when the Cubs managed to win the World Series in 2016. When I heard Sports Illustrated’s Tom Verducci was coming out with a book about the Cubs 2016 season I knew it was a book I would have to read at some point.

Well, I just finished reading The Cubs Way: The Zen of Building the Best Team in Baseball and Breaking the Curse and as just about any Cubs fan would tell you, it did not disappoint. It was a great way to relive that glorious season, go behind the scenes to find out what the players, managers and front office were thinking throughout the year, and see the strategies that built the team up from a 100 loss team to World Series Champion. What Cub fan wouldn’t enjoy that?

This got me to thinking about all the books written about championship teams that are largely devoured by those particular teams’ fan bases. Many of those books are good and interesting reads even if you aren’t a fan of that particular team. Unless you really dislike a particular team, it’s fun to hear the behind the scenes stories, locker room banter and in depth decision making made by front offices to try to make a team a championship contender. In addition to The Cubs Way, I’ve read a couple others – for teams I have no feelings for, good or bad – and have come away really enjoying them. Some are nostalgic. Others are a way to learn more about a team, players and the times in which that team was playing. Some books leave me with a lot more respect for certain players or teams I might not have been a big fan of at the time. Either way, there’s something magical about a championship season. As good as a lot of teams are, only one team can win each year and when everything comes together with championship results that moment is cherished and remembered.

I highly recommend, unless maybe you’re a Cardinals fan, picking up The Cubs Way and having a good time delving into a championship season that was 108 years in the making. After you do that, check out some of these other books about teams and seasons that won’t soon be forgotten: