A few days ago, I posted my list of the Top 5 Most Exciting Super Bowls, which discussed some of the best games in Super Bowl history. But we all know there have been some real stinkers as well – games we look back on now and probably get a bit of a laugh. Unless you were a fan of the losing team, that is.

With that, here are my Top 5 least exciting Super Bowls: 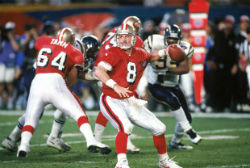 This game wasn’t as close as the score would indicate, with the 49ers going up 42-10 midway through the third quarter. Only a kickoff return for a touchdown, and a late garbage time touchdown pass brought the Chargers to within 23. Also known as the game that cemented Steve Young’s legacy, Young threw for a Super Bowl record 6 touchdowns, as the 49ers ran all over the field on the overmatched Chargers. The Chargers only real chance of staying in the game was to run the ball, but they got down by so much, so quickly, they were forced to rely on Stan Humphries and the passing game which resulted in 3 interceptions. Even without Joe Montana, this San Francisco team ranks right up there with some of the best 49ers teams of that era. A bit of Topeka sports trivia: Troy Wilson, a member of the Topeka and Shawnee County Sports Hall of Fame was a defensive end on this 49ers team. 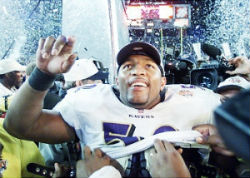 Talk about a game that wasn’t even that close – the Giants never had a prayer in this one. There have definitely been bigger blowouts in Super Bowl history, but rarely has there been a game where a team was this overmatched. Honestly, this Giants team was probably the worst Giants team to ever make it to the Super Bowl, as their offense was led by the exceedingly average Kerry Collins. The Ravens historically good defense made Collins look a lot worse than average, intercepting him 4 times, and creating 5 turnovers in all. The Giants only score came on a kickoff return for a touchdown in the 3rd quarter. If not for that kickoff return, the Ravens would have pitched the first shutout in the history of the Super Bowl. Their defense did.

Unlike some games on this list, I really thought this would be a good game going into it. Although Peyton Manning had come up short in many big games, a drubbing of this kind really came out of left field. The hype leading up to the game was regarding the game being in New York, in cold weather (oh no!). The weather was a complete non-factor, however, as Seattle would have beat down the Broncos on this day whether they played in New York, LA, at the North Pole, or on the equator. The Seahawks defense was dominant, as they picked off Manning twice including a pick six, took advantage of four Bronco turnovers, and were up 36-0 in the 3rd quarter before Denver got on the scoreboard at the end of the quarter with a meaningless touchdown and two point conversion. Very few people, other than Seahawks’ fans, were still watching to see it.

These weren’t Tom Brady’s Patriots, and these weren’t the 2016 Bears. This was a train wreck waiting to happen the moment the Patriots upset the heavily favored Miami Dolphins in the AFC Championship Game. The Dolphins dealt the Bears their only loss of the 1985 season, and with them eliminated, the Bears road to their first ever Super Bowl, behind their historically good 46 defense, was opened. The Patriots did score first, converting a field goal off of an early Bears turnover. Unfortunately for them, the Bears came back with 44 unanswered points. The Patriots turned the ball over 6 times and only had 123 yards of total offense, while the Bears rushed for 170 yards, had 4 rushing touchdowns and a pick six. I watched this game at a friend’s house when I was a kid, and by the middle of the 3rd quarter we were playing video games, the Super Bowl a distant memory.

Has there ever been a more thorough beat down in any championship game? Perhaps number two on this list is the only game that could rightfully compete. My memories of this game are Joe Montana dropping back to pass, throwing the ball, and Jerry Rice running underneath the ball in stride for a touchdown. In my memory this happened on every play, even though I know that’s impossible. Let’s look at the statistics, however, shall we? John Elway had a dismal QB rating of 19.4 with a line of 10-26 for 105 yards and 2 interceptions, while as a team, the Broncos only had the ball for 20 minutes, turned it over 4 times, gave up 6 sacks, and had less than 170 total yards. On the flip side, Joe Montana threw for 317 yards with 5 touchdowns and no interceptions, while the 49ers also rushed for 144 yards and 3 touchdowns, giving up just one sack. As a team, the 49ers set the Super Bowl record for points scored by a team, and handed the Broncos the most lopsided loss in Super Bowl history. Maybe Jerry Rice did score a touchdown on every play of this game after all.

Let me know what games are in your top five that didn’t make my list, and enjoy this year’s Super Bowl everyone! Also, check out these materials in our collection about the Super Bowl:

The Making of the Super Bowl: The Inside Story of the World’s Greatest Sporting Event by Don Weiss

The Billion Dollar Game: Behind the Scenes of the Greatest Day in American Sport Super Bowl Sunday by Allen St. John