Ah the Super Bowl; an event watched by nearly 120 million people, many of whom aren’t even sports fans, and is the driver for countless parties, bets, and water cooler chatter all over the country and around the world. Because of this immense viewership and interest, the results of the games are remembered for decades and are endlessly talked about and scrutinized. So with that in mind, let’s talk about and scrutinize the 50 Super Bowls that have occurred over the past half century. I’m going to give you my Top 5 most exciting Super Bowls, and you can tell me how wrong I am. Here we go: 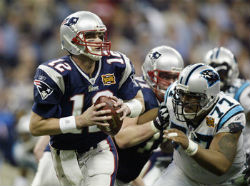 Tom Brady’s Patriots may have won 4 Super Bowls over the past decade and a half, but none of them have come easily. This is one of those victories that kind of slips under the radar, likely because of the opponent. No one really thought the Panthers had a chance; and when Jake Delhomme is your quarterback, that’s to be expected. But the Panthers showed a lot of moxie and went back and forth with the Pats all game long, before tying things up at 29 with just over a minute left in the 4th quarter. As Tom Brady so often has, however, he led the Patriots down the field and set up the game winning field goal by Adam Vinatieri with 4 seconds left on the clock. It was an exciting finish to a great game that most never saw coming. 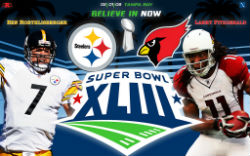 This was a great game that had a little bit of everything including a 100 yard interception return for a touchdown by James Harrison with no time left on the clock in the first half. That put the Cardinals in a bit of a hole, but they came back, led by future Hall of Famers Kurt Warner and Larry Fitzgerald, who hooked up for a 64 yard touchdown pass with under 3:00 left in the game which put them up by 3. Ben Roethlisberger led the Steelers back down the field, however, and hit game MVP Santonio Holmes for a touchdown with just 35 seconds remaining, sealing the deal. Holmes’ ability to keep his feet inbounds on that last touchdown was a thing of beauty, and the Steelers won their record 6th Super Bowl.

Why didn’t Pete Carroll give the ball to Marshawn Lynch at the 1 yard line? This will forever be remembered for that infamous play call when the Seahawks elected to pass from the 1 yard line, down 4 with under a minute to play. The resulting interception sealed the victory for the Patriots. But this game was far more than that one play. This was a heavyweight slugfest between the two best teams in the league, that lived up to the hype. Back and forth these two teams went, with the Seahawks taking a 10 point lead in the 4th quarter only to see Brady lead the Patriots back with two scores in the finals 8 minutes of the game. That set up the final drive that led to heartbreak city for the Seahawks. Why, Pete Carroll, why? 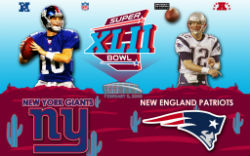 In my opinion this game rates so high not just because of the quality of the game, but also because of what was at stake. This wasn’t just a Super Bowl, whose stakes are high enough. This was an opportunity for the Patriots to put their names in the record book as only the second team to finish an NFL season undefeated, and the first to do so since the season expanded to 16 regular season games. 19-0 seemed like a sure thing, with the Patriots having already beaten the Giants in Week 17 of the regular season, but the Giants, and their defense in particular, had other plans. Able to pressure Brady like he hadn’t been the rest of the season, the Giants held the Patriots to their season low point total, and more than three touchdowns under their season average. The game was capped off by a remarkable drive by Eli Manning and the Giants – with a miraculous throw and catch by Eli Manning to David Tyree – and capped by a Manning touchdown pass to Plaxico Burress with 35 seconds left in the game. With that, the Patriots fell from the ranks of the unbeaten, and the Giants and the ’72 Dolphins celebrated. 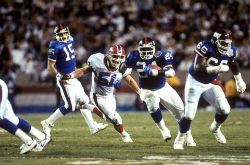 All of the Super Bowls I’ve talked about so far have been within the past 15 years or so, and for good reason. Many of the early Super Bowls were stinkers, and Super Bowl XXV was preceeded and followed by some really bad games. So it definitely stands out in my memory as a rare great game, another back and forth affair, and another gutty defensive performance by a Giants defense that was tasked with slowing down the NFL’s most explosive offense. The Giants dominated time of possession and took away the Bills passing game, daring them to run the ball which they didn’t do nearly enough. In the end it was a missed 47 yard field goal by Scott Norwood that sealed the deal for the Giants, giving them their second Super Bowl victory, and one of the bigger upsets in Super Bowl history.

I know there are several good games that didn’t make my list, so let me know which ones you think belong in the top 5. Stay tuned, as in the next few days we’ll have another blog highlighting my top 5 least exciting Super Bowls. Also, check out these materials the library has about the Super Bowl:

A Team to Believe in: Our Journey to the Super Bowl Championship by Tom Coughlin

Super Bowl Monday: From the Persian Gulf to the Shores of West Florida: The New York Giants, The Buffalo Bills, and Super Bowl XXV by Adam Lazarus