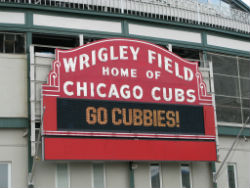 Yes, your local Sports Librarian is a Cubs fan. Although most folks around this area cheer for the Royals (and I certainly did in the 2014 and 2015 postseasons), I’m a transplant from up north, and Dad made sure I was a Cubs fan from an early age.

In fact, the Cubs are the team I have rooted for the longest, and there’s not a moment in my life when I can remember not being a Cubs fan.

So why am I telling you this? Well, you’ve probably heard that the Cubs made it to the World Series for the first time since 1945, and while them finishing the job in the World Series will not be an easy task (as I’m writing this they’re tied at one game apiece), this got me to thinking about a lot of things; some personal, and some regarding fandom in general.

First, let me tell you my story. It’s not unique, as I’m sure you’ve heard several stories over the past few days from other Cubs fans who are cherishing this moment in time, but bear with me.

I’m a third generation Cubs fan. My grandparents and parents loved the Cubs through the good and bad (mostly bad), and my grandparents also never saw the Cubs win the World Series, although they were around the last time they won the pennant. My Dad was born in 1945, the same year the Cubs last won the pennant, so he has no recollection of that, although he unfortunately remembers the Cubs debacles in 1969, 1984, and 2003. So while my pain was 39 years in the making, he had experienced the full 71 years of the same.

Baseball is his favorite sport, and although I would hesitate to say it’s mine, the game has always linked us and been something we share as many fathers and sons do. Yes, I cry every time I watch Field of Dreams when Kevin Costner asks his Dad if he wants to have a catch, because that act is one of the most special things my Dad and I have ever shared; as a kid and now as an adult.

So all of this being said, you can imagine how special it was when I was watching this edition of the Cubs – a group unfazed by curses, black cats, billy goats, Bartman, Steve Garvey, or botched double plays – roll through Game 6 of the National League Championship Series, putting up 5 runs in five innings on the best pitcher in baseball.

I called my Dad in the top of the 9th, as Aroldis Chapman was finishing off the Dodgers, and we were able to share that special moment together, albeit from afar. I asked him if he thought he’d ever see this, and he flat out said, “No, I didn’t think I’d ever see them in the World Series.” And he was dead serious. When Chapman induced the game ending double play, and the Cubs started celebrating, my Dad once again said, “I don’t believe it,” and started laughing. We talked some more, both a little bit in shock, and then finally said our goodbyes. 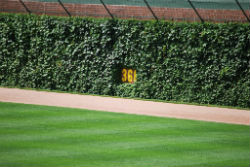 It wasn’t until the next day, when I started reading articles and watching replays online that the weight of what had just happened really grabbed hold of me. I watched the replays of the runs the Cubs scored, as well as the final double play that ended the game many times, and found that I was being reduced to tears. Of course there was the selfish aspect of just being so overcome with joy that this team that I have followed through the good times and bad over the years had finally broken through this invisible barrier when so many before them had not. It was a validation of my fandom.

I’m also a Chicago Bulls and Los Angeles Rams fan, and while I’ve seen both of them win championships, none of them were quite as special as this. And this was just winning the pennant! Royals fans can probably relate a bit to this when we think about all the years of bad baseball that were played in Kansas City between 1985 and 2014. You stayed loyal to that team and were rewarded. I don’t know if there’s any greater feeling in sports.

But I was also overcome with joy because I was thinking about my Dad and the bond we’ve always had through the Cubs, as well as those in our family who weren’t here to see this happen. People like my grandparents, and my Mom, all Cubs fans who would have been so happy to have been a part of this moment. I felt I had to appreciate it for them as well as myself.

It reminded me of the first Cubs game I went to with my Mom, Dad, sister, and Grandmother, when our car stalled on the Eisenhower Expressway, and my sister, Grandma, and I all got a police escort to the stadium so we could get to the game on time. I was reminded of my Grandfather who my Dad told me would always say the Cubs were going to lose when Phil Regan came into the game from the bullpen because he always blew leads in the late innings.

I was reminded of my Grandmother who couldn’t watch when Jody Davis came to bat because she thought he always struck out. Of course, one time when we were visiting her she turned around in her chair when he came to the plate, and he hit a home run. So from that point on whenever Jody Davis hit a home run we would always say that Grandma must have turned around. All of these family memories came back and it was hard not to get emotional. 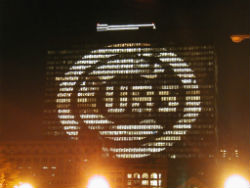 This is why many people have been saying that the Cubs winning the pennant isn’t just a sports story. Because sports, fandom, and the teams we follow aren’t just about the games being played.

Sports are about family, friends, relationships, and bonds that are forged through years and years of watching games, cheering, booing, commiserating, and celebrating. I will always say that the run the Royals made in the 2014 playoffs is one of the most amazing examples I’ve ever seen of a community and region coming together.

Think about it, for those of you who were here to witness it; when was the last time you experienced the kind of bond we all felt as a community during that playoff run? I’m not even a Royals fan, but I felt it, and got swept up in it. There was a sense of goodwill and togetherness we all shared here that is rarely shared, except in dire circumstances. That’s what sports can do, and that’s powerful.

Maybe this is why I’m reduced to tears every time I watch those 25 ball players I’ve cheered on all year celebrate after winning the pennant. Cubs fans, both living and dead, and all of our pain through the years, were there last Saturday night in Chicago. And as Anthony Rizzo caught the final out at first base, our weight lifted, and as one we felt a joy we had never experienced before.

To find the library’s materials on the Cubs and DVDs of World Series past, check out Matt’s blog post. To look further into sports fandom and why sports fans are who they are, check out this book:

The Secret Lives of Sports Fans: The Science of Sports Obsession by Eric Simons