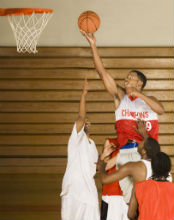 Be a part of the library’s NCAA Tournament Bracket Challenge and compete for a chance to have your name displayed on a winner’s plaque in the Sports Neighborhood.

Our bracket challenge is for you if you’re tired of paying to join your office pool, or participating in the free online brackets that have a million people, which means you really have no chance of winning. Not only is it free to participate, but it’s local, which means you won’t be competing against the same number of entries you find at the national sites. You don’t have to be an expert to play, in fact if you know anything about how these bracket challenges work, it’s often the people who know the least that win. Simply create an account, and start filling out your bracket. Sign up begins after the brackets are announced on Sunday, March 13, and will continue through the start of games on Thursday March 17.

You’re likely already filling out a bracket anyway, so be a part of the library’s 2016 NCAA Tournament Bracket Challenge and compete for a chance to win!