Browsing the stacks in the Best Seller Express section I came across the book  Ali: A Life by Jonathan Eig. There have been numerous books written about  Muhammad Ali and I wondered if I would find out anything new. I checked it out intending to only skim it. Much to my surprise I quickly became engrossed in the well-researched and extremely readable book. More than 200 people were interviewed over a span of 5 years shedding light on a man who was many things.

As a boxer Ali proclaimed himself to be “The Greatest of All Time.” Ali was without a doubt the baddest, brashest, loudest, prettiest and probably the most controversial sports figure of the past 50 years. As great as he was as a sports figure, what he did out of the ring was just as impressive. 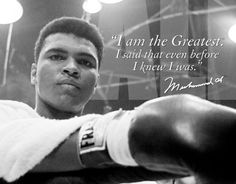 Ali was a man I followed for most of my life. Starting in 1964 with his totally unexpected victory over Sonny Liston to become the World Champion for the first time. Soon after this fight he announced his conversion to the Nation of Islam, that he would follow the teachings of Elijah Muhammad and change his name from Cassius Clay to Muhammad Ali. In doing this he first became a thorn in the side of America and then a hero to America.

As the Vietnam War era protests reached their crescendo, Ali took a stand against the war refusing to be drafted into the military. He famously quipped, “I ain’t got no quarrel with the Viet Cong.” This refusal to be inducted led to his being stripped of his title and exiled from his sport. Yet Ali’s “itch to rebel,” as Eig puts it, was balanced by his lust for fame and fortune.

Once Ali regained his license and resumed his career some of the most iconic events of the 1970s were highlighted by Ali. There were three legendary fights with Joe Frazier. The fight known as The Rumble in the Jungle with George Foreman. The third fight with Frazier was a brutal fight in Manila, which Ali won, but both men were badly hurt. After this epic battle neither fighter was the same.

It has long been theorized that the injuries to Ali in this brutal fight led to the physical problems that medical authorities say led to a slow descent in physical and mental ability. Those closest to Ali encouraged him to retire. Undeterred, Ali was motivated by his desire to compete and be in the limelight. It is likely he also fought on because of his need for money. He lost and regained the championship, all the while fighting against less than top flight competition. The pattern continued until a final misguided fight against Larry Holmes.

Eig shed much light on the terrible toll Ali’s career took on his health. So much so that when you thought of Ali you thought less of him as a fighter and more of tragic figure. A man famous for his wit and poetry lost nearly a third of his cognitive ability in his 20s and 30s. A time in a healthy person’s life when it should not decline at all. His brain just suffered too much damage from the more than 200,000 blows to the head during his career.

In retirement Ali was beset by failed marriages, bad financial advice and declining health. He would occasionally emerge from the shadows and served as a Good will ambassador all over the world. As his health declined so did his public appearances.

The highlight of this portion of Ali’s life occurred on a hot summer night in 1996. At the Summer Olympics in Atlanta there was one last moment to treasure. With his body shaking and weak from Parkinson’s disease there was one more moment of greatness. Ali, emerged from the shadows took the Olympic torch from sprinter Janet Evans and lit the cauldron to begin the Atlanta Olympics. It was one last moment of greatness in a career and a life full of great moments. During this era until his death in 2016 Ali was kept in the public eye.  Countless books and documentaries were written trying to capture the man. An Academy Award winning movie starring Will Smith also helped to keep Ali relevant.

This book may serve in time to be a definitive book on Ali’s life. While Eig’s book will doubtlessly be the last, this one is proof that even in the most examined lives there are corners where it is revealing to shine a light.