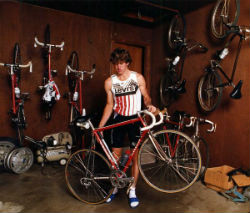 Topeka native and cycling great Steve Tilford was tragically killed in a car accident on April 5, 2017. You may not know the high level of success this Topeka High School alum and member of the Topeka and Shawnee County Sports Hall of Fame had in the world of cycling. Here is a brief list of some of his accomplishments.

As you can see, Tilford had success across all areas of cycling and was called a master of cycling disciplines. He continued to compete right up until his death, and kept a blog of his exploits and travels with his dog, Tucker. I never had the chance to meet him, but from what I understand he was a genuinely nice guy . He will be missed by many.

Be sure to visit the Topeka and Shawnee County Sports Hall of Fame in the library’s Sports Neighborhood where you can see Steve Tilford’s Hall of Fame plaque and check out some of these books from our collection on cycling:

The Bicycling Big Book of Cycling for Beginners by Tori Bortman

The Complete Book of Long Distance Cycling by Ed Burke