The Super Bowl is 50 years old, and what better time to look back on some of the more memorable moments in Super Bowl history. Of course we all have our favorite moments – I’m going to share a few of mine with you, and hopefully you’ll let me know some of yours as well. 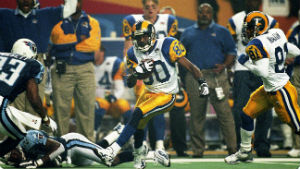 The most memorable moment of any Super Bowl for me, came in Super Bowl XXXIV, a game the Rams won by defeating the Titans 23-16. I’m a lifelong Rams fan, and with this being the lone Rams Super Bowl victory, I suppose this makes sense. You might think Mike Jones’ tackle of Kevin Dyson on the 1 yard line as time expired would be the moment I’m talking about (yes, that was awesome), but actually my number one moment was the 73 yard touchdown pass Kurt Warner threw to Isaac Bruce to give the Rams the lead they would never relinquish. After watching the Rams blow a 16-0 lead, and facing 3rd and long from their own 27, things were looking pretty bleak. I’m not one to get too emotional when I watch games – even ones my favorite teams are playing in – but I have to admit I jumped up and started screaming when Bruce caught the ball and headed to the end zone. It might be just about as excited as I’ve ever been watching a game. It also didn’t hurt that Isaac Bruce is my favorite football player of all time. 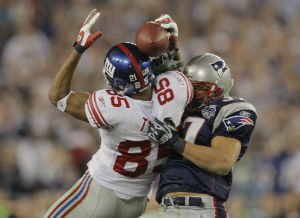 David Tyree makes one of the greatest catches in Super Bowl history – the sportspost.com

It would only make sense to include a play from Super Bowl XLII, a game in which the New England Patriots were vying to become only the second undefeated team in NFL history. The Giants would have none of it, however, defeating the Patriots 17-14. The play that I’ll never forget, and which has been hailed as one of the greatest plays of that decade, was a 32 yard throw by Eli Manning to David Tyree on 3rd and 5 with less than a minute remaining, which has become known as the “Helmet Catch”. Not only did Manning almost get sacked on the play before he threw it, but Tyree caught the ball by pinning it to his helmet. It was an amazing play that set up the winning score for the Giants, and ended the Patriots perfect season. 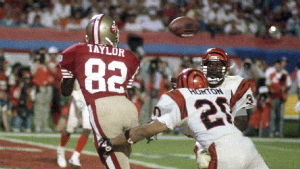 Another play that stands out to me is from Super Bowl XXIII between the 49ers and the Bengals. Being a Rams fan, I really hated the 49ers growing up and was hoping the Bengals would be able to finish off the game when they were leading 16-13 late in the fourth quarter. But as he did so many times throughout his career, Joe Montana led the 49ers down the field and threw the winning touchdown pass to John Taylor on a slant route over the middle with less than a minute remaining. I’ll never forget that play, and how mad I was that San Francisco had managed to pull out another big win. My hatred of the 49ers grew even more after that game!

These are just a few of the moments that have stuck with me over my years of watching the Super Bowl. Let me know what some of yours are – there are plenty more, and I’d love to hear what sticks in your mind.  Here are some materials the library has on the Super Bowl:

When it was Just a Game: Remembering the First Super Bowl by Harvey Frommer