Topeka and Shawnee County Public Library Trustee David Monical passed away on May 11, 2021. His decade of service on the library’s Board of Trustees began in 2011. He served as Chair in 2015 and 2016. Monical was a dedicated trustee and attended his last board meeting in April 2021.

“David Monical, a friend for many years, was an individual who inspired and embraced creativity and thinking outside of the box to help a process or project move forward,” said Jim Edwards, Chair of the Library Board of Trustees. “What really set him apart from others was that he didn’t care who got credit for movement forward as long as there was movement. While David is no longer with us, his spirit and the programs that he touched, will be with us in the future.”

In an interview for Library News Oct-Nov 2012, Monical shared that he was proud of the strides the library has taken to urge publishers who were reluctant or refusing to sell ebooks to libraries to offer or improve library access to ebooks. The library started an online campaign called Ebooks for Libraries with a petition that 10,000 people signed within 90-days. Paper rolls of signatures were sent to publishers with a message that readers want books in all formats from their public library. 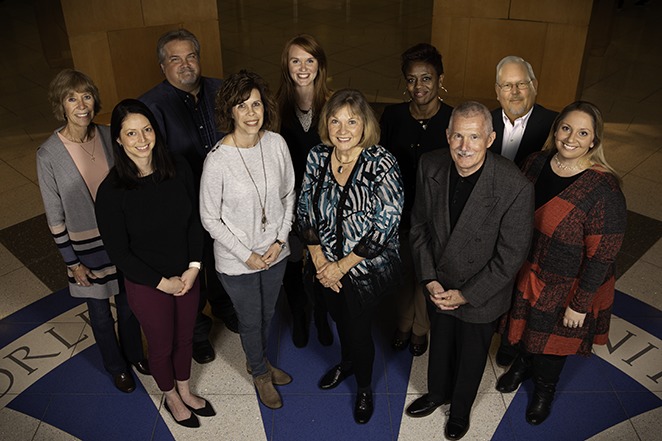 “Every time the library opens its doors it makes a difference on the future of the community,” Monical said. “All you have to do is see all the young people in the library. The future is going on every day here. The library is going to have to change. I’ll leave it to the experts to figure out what that change is, but it’s the job of the trustee to make sure the change is progress.”

His 2012 prophecy for change came true with technology improvements expanding access to library resources and meeting the needs of the community. Monical said he was thrilled to be part of the board that turned around the erosion of the collections budget to put more books, movies and games on the shelves. His favorite part of the library was its collection. Monical was an avid reader and was impressed with the entire library staff.

“David was a leader, stalwart of the board and a strong advocate for the library,” said Thad Hartman, Interim CEO. ”His presence and demeanor in the board room reflected the seriousness of the library business. David will also be remembered for his warmth and humor when welcoming colleagues and friends to his home every December to celebrate the past year and look forward to the future of our library. We were lucky to have him as a trustee and a friend. He will be greatly missed.”

Diana is the communications & marketing director. She spends her days managing all the library’s communications and marketing strategies that help connect people to library resources, services and happenings. A seasoned professional, she has been telling stories in print, digital, video and live broadcast formats for three decades.