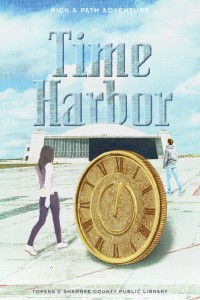 Readers can pick a path and follow one of three characters on time travel expeditions to Topeka’s past. In this prologue, get to know high school students Mai and Han and their history teacher Mr. Clark Detrick, and learn more about the Blast to the Past contest that is sending them from April 2050 to a very unique field trip experience. Don’t worry, the manual explains the safety medallion security features – what could possibly go wrong?

Learn more about the project at tscpl.org/novel. 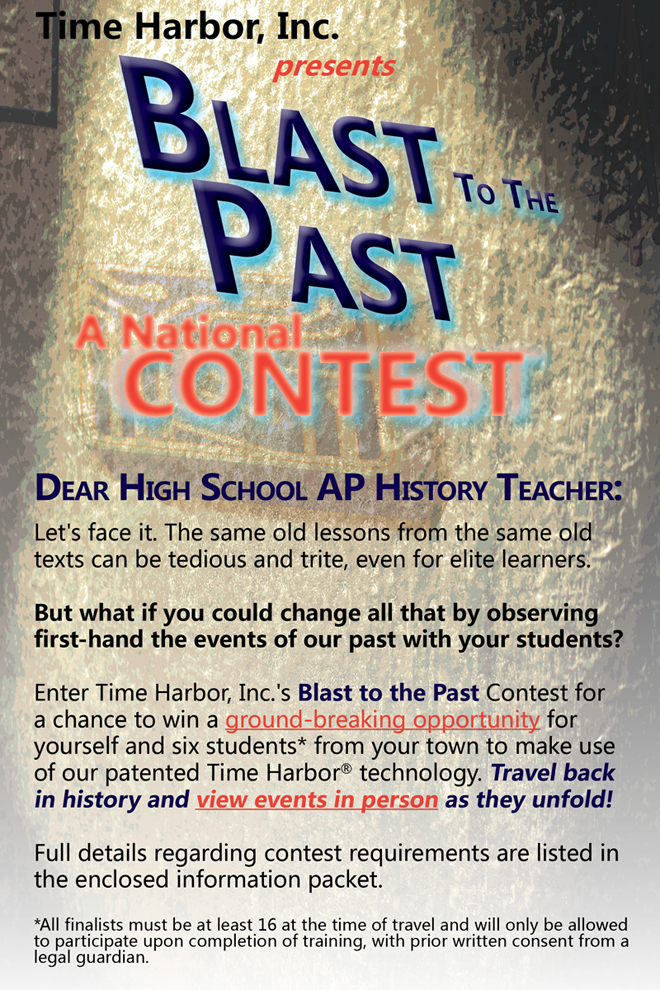 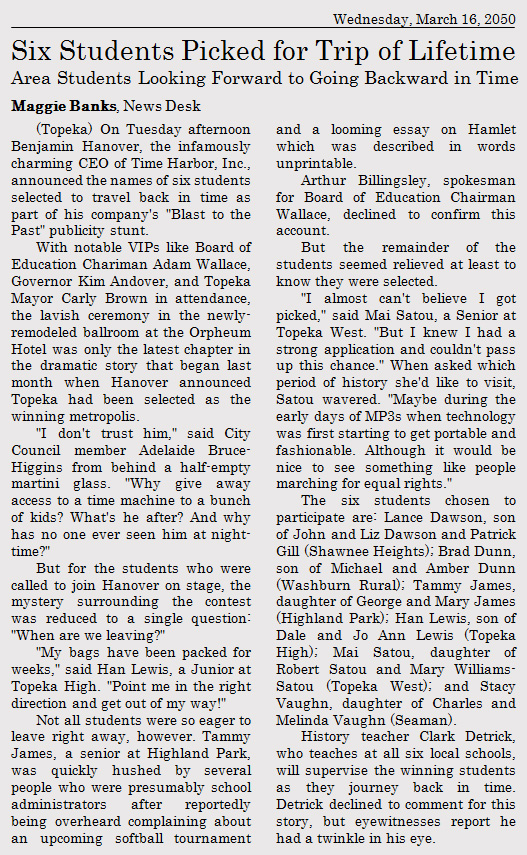 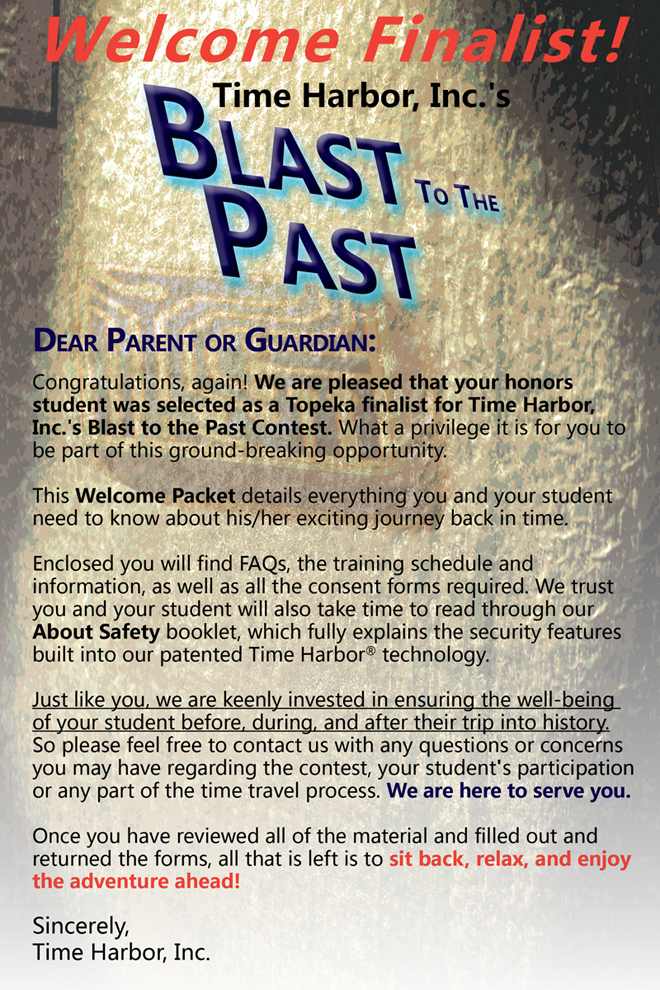 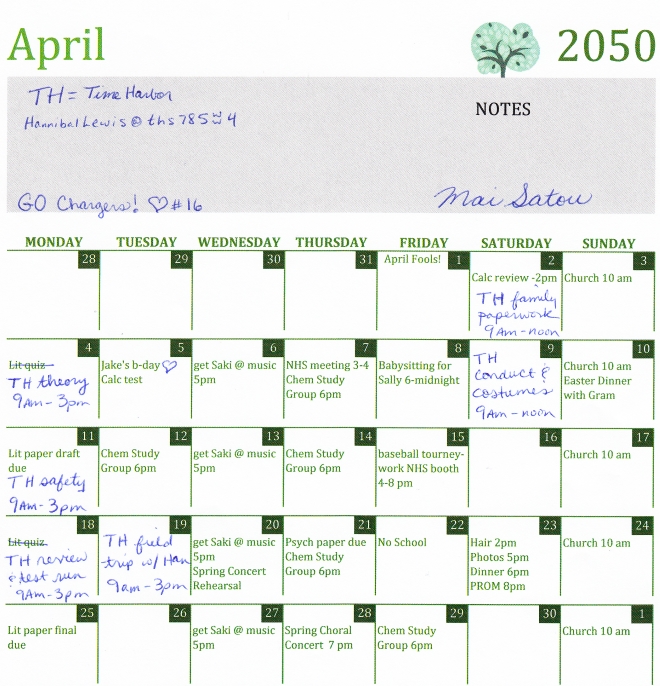 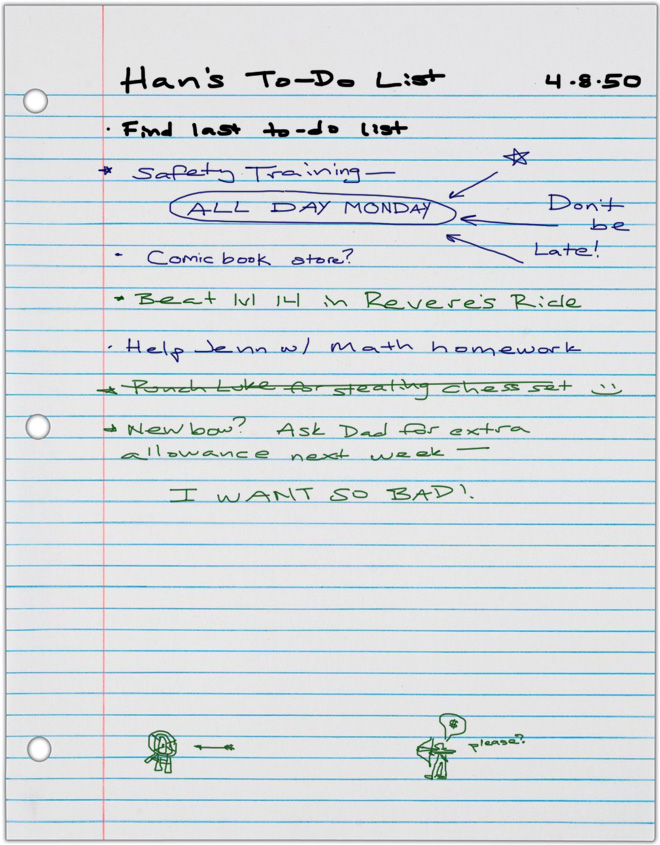 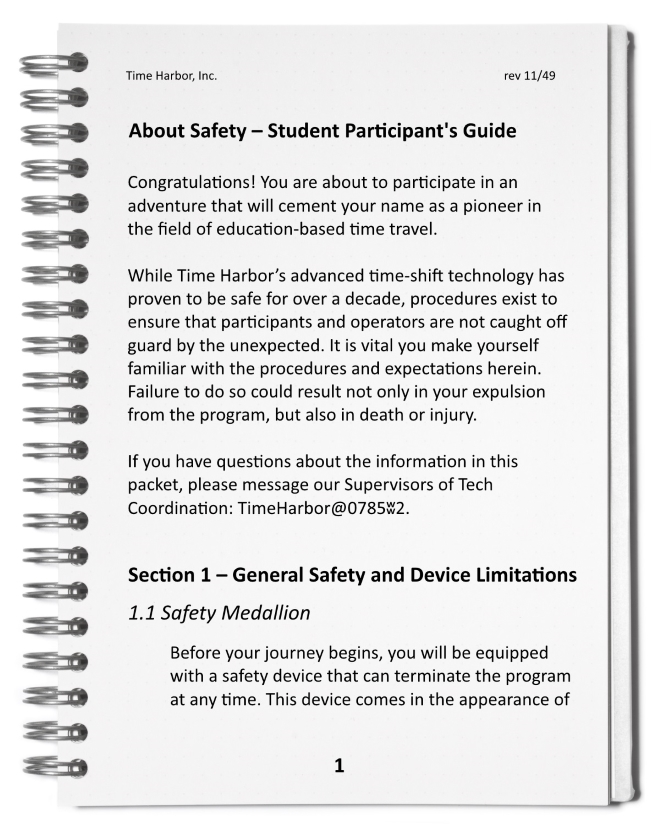 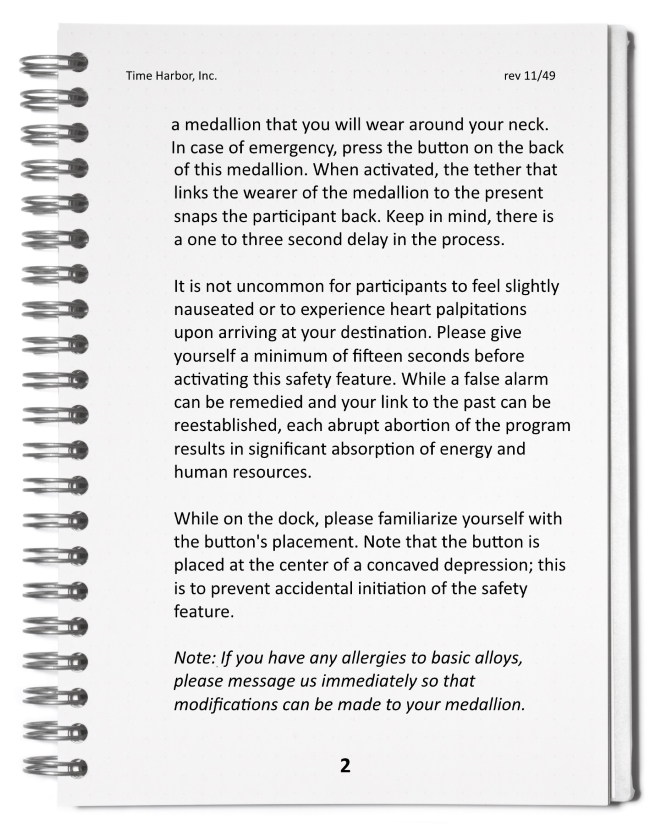 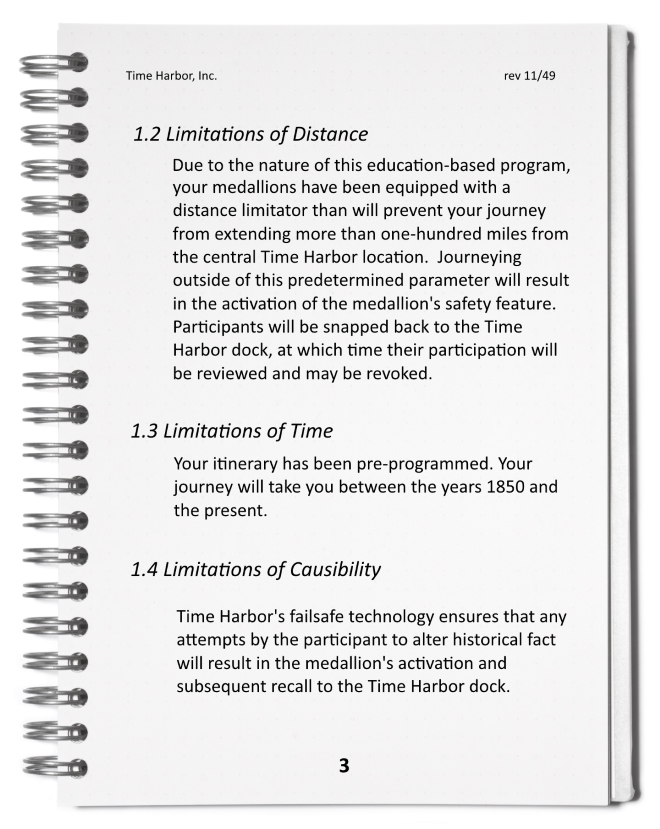 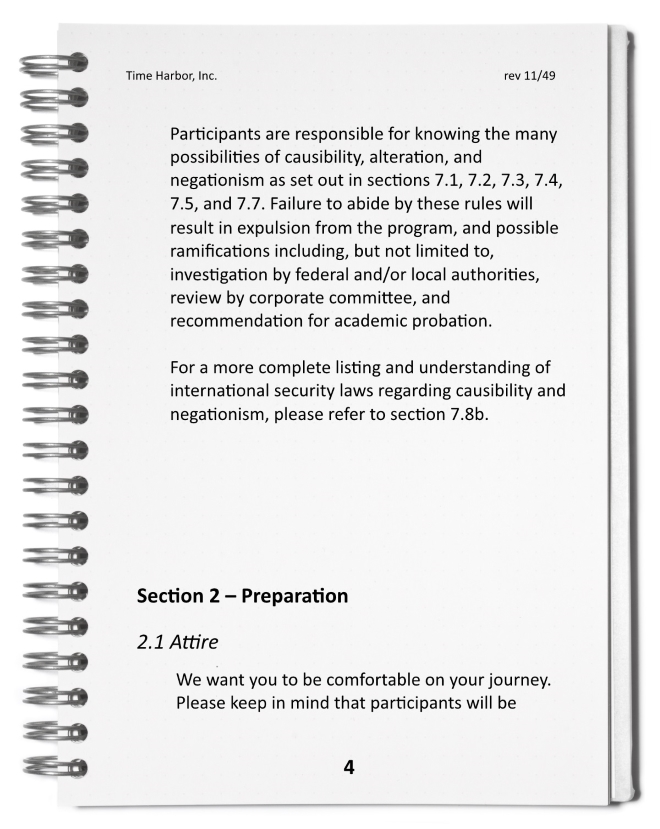 The screen turns on with a soft click. A man in his mid-thirties sits facing the camera. His elbows rest on the arms of the old, overstuffed chair and his fingers are steepled beneath his chin. He peers directly into the lens from behind dark-framed glasses.

Hello. My name is Clark Detrick. You may not have heard my name before, but I have a feeling that, in the near future, that could change. I am about to embark on the experience of a lifetime and have the opportunity most historians can only dream of: the chance to see, first-hand, the events of our tumultuous past and confirm once and for all that my theory, not established historical belief, is right.

The scene cuts away. Detrick stands in front of a classroom, lecturing to twenty teenagers. The audio is muted in favor of Detrick’s voiceover.

But first, a little bit about me: I am a roving Advanced Placement History Teacher in Topeka, Kansas. That means I spend my time teaching history to very bright, but easily distracted, students at the six public high schools in the city. It’s a rewarding job…

While Detrick has his back turned to the class to write on the electronic board in front of him, a balled up piece of paper flies from the back of the room and hits him on the back of the head. He spins around, and he can barely be heard saying “All right, who threw that?”

…most of the time.

The footage that shows next is older, the colors not as crisp and the definition not as sharp. The shaky quality brings to mind video shot with a cellphone – an early model. A young man, no more than six, stands atop a dusty mound wearing a cowboy hat and aiming a silver plastic six-shooter at invisible foes. “Lookit me, Daddy!” he calls out to the person holding the camera. “I’m Billy the Kid!”

But my real love, my real drive, is my research. The Wild West. A time when outlaws and lawmen alike carved their mark into our collective consciousness and became our own Olympiad. The Greeks had Zeus and Hercules. We had the James Gang, the Earps, and an eerily charismatic young lunatic by the name of William H. Bonney, aka Billy the Kid. I dedicated myself early on to these uniquely American myths, and carried that dedication through to both my academic and professional life. In particular, I took special interest in the events of October 26, 1881 in an Arizona town by the name of Tombstone. I never did quite believe the historical record of events that dusty afternoon. Who shot first, where the bullets all landed, who was responsible for each of the dead. I have my theories, none of which I’ll share here. I’ll publish those once I’ve confirmed them. And my confirmation leads us to the purpose of this tape.

The scene changes again. It’s a press conference, and Detrick is shaking hands with dignitaries, having his picture taken with the mayor and with other important looking people in expensive-looking suits. And then there are the children – six teenagers in various degrees of enthusiasm that run the gamut from excited to “can I go home yet?” Detrick stands behind them, grinning widely at the camera as flashes go off around them.

Time Harbor, Inc.’s Blast to the Past contest caught my attention early last year. They were offering the opportunity for a teacher and six of their brightest students to travel back in time. Granted, it was going to be a very focused and controlled trip, but the application process was only a means to get my foot in the door. To get their attention, I hand-picked the brightest pupils from each of the schools I work with. These are the absolute top historical scholars in Topeka: Tammy James, Highland Park High School; Stacy Vaughn, Seaman High School; Lance Dawson, Shawnee Heights High School; Han Lewis, Topeka High School, Mai Satou, Topeka West High School; Brad Dunn, Washburn Rural High School. I reviewed each of their application packets meticulously to make sure we stood out as an elite group of scholars and a vibrant group of students. And then I also included, in my portion of the packet, a proposal regarding a research project that could be very lucrative to all involved, if we managed to find the information I was convinced I could find. Not on the initial trip, of course. In a subsequent use of Time Harbor’s hardware.

The feed switches to handheld camera footage of the students, gathered in an airplane hangar. They’re seated around a large screen, each in an official Time Harbor t-shirt. They’re watching a recording. An animated girl and boy are providing an animated tour of a machine much like the actual one that stands just behind where the students sit. The device consists of eight reflexive panels arranged in a circular fashion around a raised, vented platform. Black pillars are placed between the panels; wires run from the pillars to a bank of computer stations.

After Topeka won the contest, Time Harbor set to work preparing the device and educating their young time travelers. An abandoned hangar at Forbes Field was chosen for the site, since it provided enough room and enough seclusion from the rest of the city. They’re very secretive about their technology. Once the location was secured and construction began, we were all transported to the site to begin the instructional phase of the project. The students were given tutorials on the basic theories behind the machine’s functioning, rules and guidelines for their journey, multiple safety lectures. They were also divided into pairs, much like the “buddy system” they were used to in elementary school. The pairings were random, and caused their own chaos. Mai and Han found themselves paired together, and apparently not even very bright students can put silly school rivalries aside in the name of science.

The feed shifts one last time, switching to a live feed of the hangar. The students are standing in smaller groups – the three boys huddled around a handheld Brad is playing a game on, Tammy and Stacy chattering in a corner and failing to covertly glance at the three boys, Mai seated on a stack of crates reading a digital book. Behind them, people in navy Time Harbor jumpsuits adjust the alignment of the panels and pillars and tweak dials and switches on the control boards. The camera spins and Detrick’s face fills the screen again.

We are just about to take our practice run trip back to 2015, the year before I was born, just to ensure all systems are correctly functioning and everyone understands the rules. Don’t worry, I won’t record that. It will be very brief and not all that interesting. Afterwards, we’ll begin taking the students back a pair at a time, with me escorting them for the sake of safety and to prevent any sort of liability issues. Oh dear, what’s that commotion…

The camera swings back to the students, who are the source of a loud grumbling and wailing. Time Harbor employees are moving amongst them with a hand out to each for their electronics. Brad slams his into the employee’s hand. Tammy protests that her whole LIFE is on there. Lance is caught trying to hide his inside his shirt. Stacy, Mai, and Han offer theirs out with muttering.

The screen goes dark. A second later, it comes up again on a beaming Detrick, who appears to be crouched in a small, dark space.

Test run was a success! The noise you hear in the background are six very excited children who just had time travel confirmed for them. We will begin the actual trips tomorrow morning. Time to switch to the eyeglass cam for recording. When next you see us, Han, Mai and I will be speaking to you from the past!

Click on a character to pick a path into the story and see what happens next! 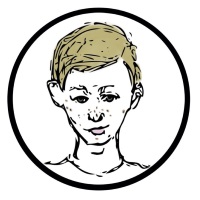 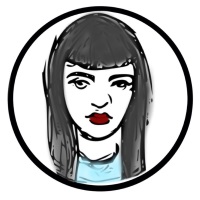 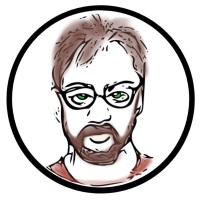